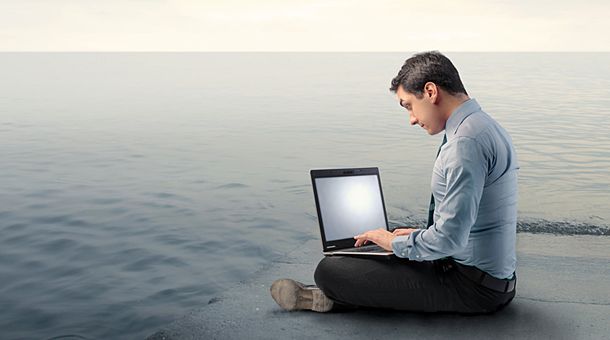 "Have you lost your touch?" were the words my wife said to me as I struggled with the latest PC plug-in gizmo. For some reason her use of the word "touch", started me thinking about all the Zoom meetings we're having now. And working with a number of family business owners during and since Covid via Zoom, Skype, Windows Teams etc., on how to manage their businesses, I've noticed the difficulty people have in making real connections when they use these virtual communication tools.

Have we in fact "lost our touch" when it comes to connecting with others?

Since the early days of humankind, we've used all five senses (and according to the latest scientific research, there are many more than five) to connect, and indeed to survive. We use our senses to gather and respond to information about our environment, which aids our survival. Each sense provides different information which is combined and interpreted by our brain. Can we do this via Zoom?

It seems as though we are now relying on just two – sound and sight. How can we get a real "feel" for others and connect to build meaningful relationships without touching, eating and smelling with them? For instance, many readers will be aware that in some cultures, it's imperative to have a meal together before doing business – can we do this electronically?

Ultimately, we shouldn't take anything at face value – our experience of the world is a multisensory one.

I became even more concerned with this lack of "touch" when I read a news article recently that suggested many firms including Airbnb, 3M, Spotify and Yelp, are moving away from hybrid to full working from home, because the complexities of hybrid are too difficult. That seems like a management copout to me.

Granted, many people enjoy working from home, and some enjoy the variety of hybrid. Still others prefer to go to an office to enjoy the comradeship of physically working together.

The authors suggest that apparently hybrid work is really hard to manage, "As some workers have returned to offices, the downsides of in-and-out hybrid schedules have started to become clearer, from awkward Zoom calls in conference rooms to emotional exhaustion for workers and logistical headaches ensuring team members are in the office at the same time".

That seems like a test of good management to me which although quite challenging, with good systems and sound logistical planning, it should be possible to manage the needs of both the organisation and the employees. However, there maybe even a greater challenge these organizations are neglecting – their culture.

Referring to Yelp, one company that is going full home working, Jason Schloetzer, associate professor at McDonough School of Business, Georgetown University, says, "I think any kind of job or industry where people can work independently and don't require a lot of intensive collaboration could roll the dice and follow in Yelp's footsteps. But even for those companies that seem uniquely primed to go fully remote, that's not necessarily the culture that every company wants to have".

And to my mind, Schloetzer, is right about culture. Complete home working is akin to having a full compliment of contractors on board instead of engaged employees. How can people become engaged with the organisation if they cannot use all of their senses to fully engage with one another?

Traditionally, how do organisations build and sustain the culture that enables them to be successful both now and into the future? At the broadest level, they build culture through the myriad interactions people have with one another to create "the way we do things around here" – the commonly accepted description and underpinnings of culture.

Undertaking research into a new book on corporate culture (to be released in November), my co-author Dr. Melinda Muth and I, have discerned that corporate culture is established by two things – the founder's values and the demands their industry places on them. Once established, it's sustained by who they employ, how these people are inducted, how they are recognised and rewarded, and the behaviour displayed by their leaders. And that behaviour is leveraged through the "Personality" the organisation develops (their internal or external Locus of Control); the Rules and Policies developed and practised; the Formal Statements leaders make (internally and externally); the Rituals of how the people interact; the Physical Space within which the people work; and the Words and Language used in conversations, particularly by the leaders who set the tone and ultimately the culture, from the top.

How many of these critical cultural factors are present during virtual meetings?

Our work also suggests that leader behaviour, the consistency between organisational policy and leader actions, along with leader role modelling, determines the degree to which the organisation's culture emphasises ethics and positive behaviour. In practical terms for those organisations who have gone fully virtual, I find it beyond my comprehension as to how this will work.

Virtual organisations may be successful to some extent in industries where employees are tasked with work that perhaps requires a single-minded focus, such as in certain sectors of the IT industry – industry demands was one of the two factors in the development of corporate culture we discerned in our research. And if we look at the organisations mentioned earlier who are purportedly going fully virtual - Airbnb, 3M, Spotify and Yelp – which of these would be suited to becoming virtual organisations?

If I'm to predict the future, then I'd suggest that of those organisations, Yelp (the review website), Airbnb (the accommodation booking website) and Spotify (music streaming), because of the nature of their business and particularly the methods they use to connect with their suppliers and customers, are most likely to be successful "virtually". However, even here, my future vision is that they will still have a small corporate cadre of people who physically work together, with the rest of their employees, as 'contractors".

My concern however, is for those companies such as 3M who have a different modus operandi. 3M (founded in 1902) operates in a myriad of industries and relies on their innovative employees to continually develop and produce products that you and I use every day. They've become extremely effective at connecting their 95,000 global employees virtually. However, they are also very good at encouraging their employees to meet face-to-face to share ideas, work in project teams and to support one another (in physical locations) and in the process, use all their senses to maintain their core mission of "innovation". Maybe in moving to a new modus operandi they've been seduced by their "virtual" successes?

So before going virtual, my advice to Boards and CEO's considering how to structure and manage their organisations in this "new normal", is to seriously consider how important the development and sustenance of their corporate culture is to the long-term success of the organisation.

It would be disappointing if further down the track, people setting the tone at the top of a virtual organisation were to say, "Have we lost our touch?"

Bob Selden, is an author, management consultant and coach based in New Zealand and working internationally. Much of his time currently is spent working with family businesses. He's the author of the best-selling What To Do When You Become The Boss. His new book, What To Do When Leadership Is Needed, was released in July 2022.