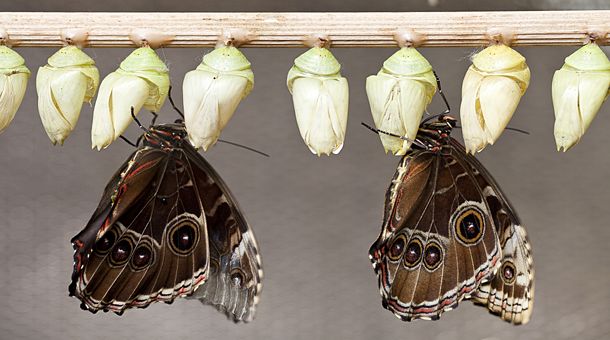 We live in a time of unprecedented accelerating change where new technologies are adopted at continually shrinking speeds. For example, while it took thirty-eight and thirteen years respectively for radio and television to reach a market audience of 50 million people, the Internet reached that threshold in four years and Facebook in a mere two years. This breakneck acceleration is likely to continue as the Internet of Things (IoT), artificial intelligence (AI), 3D printing, and robotics dramatically change the ways we go about our day-to-day lives.

All this upheaval presents business leaders with a difficult challenge: The world is changing much faster than their organizations. This is troublesome because traditional business organizations are not designed for adapting to change or aligning with shifting markets. Top-down hierarchical structures are better equipped for maintaining the status-quo through the exercise of control and market dominance. They have so excelled at this goal over the past century that the term management has become synonymous with control.

So, it is not surprising that, as managers consider how to deal with this new market phenomenon, they would embrace the idea that the best way to manage change is to devise a methodology to control change. Their solution is the popular practice known as change management.

Albert Einstein once wisely observed, “We cannot solve our problems with the same thinking we used when we created them.” Unfortunately, the well-intentioned solution of change management seems to ignore this perceptive advice. The notion of change management is an illusion based on the false premise that business leaders can control the forces of change by making internal adjustments to their existing organizational structures.

When managers embrace this illusion, change becomes the subject for a new form of project management. Accordingly, management gurus have devised multi-step processes for managing change that include specific activities, assigned responsibilities, milestones, and deliverables. In some instances, organizations have created change management departments, as if change were a function like finance or marketing.

The simple fact is change management is an oxymoron. Change is going to happen regardless of any efforts on our part to alter its effects through internal organizational gyrations of a century-old management model. The stubborn reality is that change is completely impervious to our attempts to control it.

When confronted with accelerating change, business leaders should keep in mind the wise counsel of Leon Megginson, who applied his own interpretation of Darwin’s central thesis to business: “It is not the strongest of the species that survives, nor the most intelligent; it is the one most adaptable to change.” In other words, if organizations do not adapt to change, they run the risk of becoming extinct. In a time of great change, this risk becomes even more likely, as is evident in the increasing turnover of Fortune 500 companies.

If business leaders want to avoid extinction, they have to embrace a new competency that is foreign to their corporate DNA: They have to learn how to adapt. This is difficult because the established tools and practices of traditional companies are not designed for adaptation. They are instead designed for efficiency and control, which means their strategic focus is on compliance with the accepted ways, maintenance of the status quo, and doing things right.

When organizational tools and practices value adaptation over efficiency, strategies are riveted not on doing things right but rather on continually uncovering the right thing to do, which can be a moving target in rapidly changing markets. Netflix is an example of company that is built for adaptation. While they began as a DVD mail vendor, they have successfully evolved into a streaming company and a content producer in response to changing technologies and shifts in customer values.

Blockbuster, on the other hand, is an example of a market leader that became extinct because its leaders overvalued efficiency and got caught in the status quo strategy trap. Although they excelled at operational efficiencies in running video stores, their excellence meant nothing when consumer preferences transformed their stores into modern day ghost towns. To paraphrase the sage counsel of Peter Drucker: There’s nothing more useless than doing the wrong thing right.

In a rapidly changing world, doing the right thing is job one. Doing things right, while important, is nevertheless a secondary job. Unfortunately, most companies devote too much attention to the secondary job and not enough time and energy to job one. This has to change if well established market leaders want to remain competitive in digitally transformed markets. They need to accept the reality that change cannot be controlled and shift their efforts from change management to adaptive management.

The shift to adaptive management begins with approaching the work of strategy very differently. For many decades, planning has been the reliable foundation for strategy because of a dependable and unquestioned assumption, which until recently, has been a stable guideline: The past is a proxy for the future. When this assumption was true, business leaders could look backwards to accurately forecast the future and build a strategy to make the anticipated tomorrow a reality.

However, now that the past is likely to be very different from the future and the pace of technological change is so rapid that disruptive innovation has become the norm rather than the exception, business leaders can no longer look backward to extrapolate strategy. In times of great change, strategies are not planned; they’re discovered. And the activities that support discovery are substantially different from those that bolster planning.

When discovery is the context for developing strategy, innovation—creating something that has never existed before—becomes a critical core competency for business leaders. Looking backward is often of little use when markets demand innovation because in a rapidly changing world, strategic planning is often an inadvertent path to corporate extinction. This is not to say that planning is not an important business attribute. It is and remains an essential activity in tactical operations. As the leaders of Netflix well understand, in fast-changing times, planning is very useful for doing things right, but very useless when figuring out the right thing to do.

When the business landscape was more stable and the future was a linear progression from the past, analytical processes were the primary tools that informed strategy. This explains why twentieth-century managers were so intensely focused on numbers. If you understood all the interrelationships and nuances of the historical numbers, you would have the insights needed to safely plot the future destiny of the business. However, when discovery is the foundation for strategy, a very different and unfamiliar set of activities - emergent processes - become the essential tools that help business leaders chart the future course of the company.

The big differences between analytical and emergent processes are in both the source and the context of their data. As noted above, the key data in analytical processes are numbers and the context for extracting information and insights from these numbers is fundamentally linear. This linear thinking is evident in the pervasive short-term biases of traditional managers who, regardless of the rapid changes happening in the world around them, often assume that the current business models of their particular company will continue for the foreseeable future.

On the other hand, the key source for data in emergent processes is people, specifically employees and customers, and the context for gleaning ideas and insights for new business models that have never existed before is holistic, which means companies need to be adept at rapidly aggregating the collective intelligence of their employees and customers. That’s because the collective intelligence that emerges from facilitated gatherings and discernible behavior patterns is far more likely to generate new ways for solving customer problems than linear extrapolations of historical business trends.

If market leaders want to retain their competitive edge, they need to value adaptability over efficiency, become highly skilled in the practices of strategic discovery, and remember there really is nothing more useless than doing the wrong thing right!

The essential challenge in times of great change