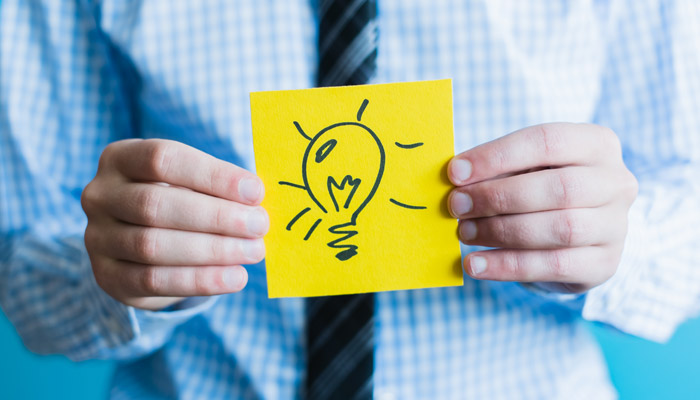 Back in 2013, The Harvard Business Review featured several articles on how companies could “put the breakthrough back into innovation.” In one of the articles, Regina E. Dugan and Kaigham J. Gabriel highlighted a problem that continues to plague businesses today: most companies have difficulty delivering breakthrough innovation.

While the majority of companies are capable of executing incremental innovation - creating new ways to deliver existing products - it is rare to find an established company that can create a breakthrough product model that radically transforms an industry. Breakthroughs usually come from disruptors who are not part of the mainstream and, more importantly, not limited in their thinking by pressures to sustain yesterday’s success.

Breakthroughs happen when we think differently and make unusual connections, such as combining a phone and a camera into one product. Because traditional companies have difficulty thinking about anything that might threaten their existing products, they are unable to deliver breakthrough innovation, and as a consequence, they increasingly find themselves the victims of disruptive innovation. And when they are gone, nobody notices because the disruptive innovations deliver so much more value.

To be blunt, nobody misses the Encyclopedia Britannica, Tower Records, Borders, Blockbusters, or Kodak when you have Wikipedia, Spotify, Amazon, Netflix, and Apple. Given the accelerating pace of technological innovation, more and more companies are likely to become victims of disruptive innovation unless they can learn how to put the breakthrough back in innovation.

The root of the problem, according to Dugan and Gabriel, is that traditional approaches to corporate research and development - and we can add to this many corporate innovation departments - are unwittingly designed to promote incremental innovation. This happens because the executives in the mainstream organization apply pressure to force compromises that assure existing businesses are not disrupted. This behavior highlights the reality that failure to deliver breakthrough innovation is usually more of a managerial shortcoming than a lack of engineering creativity.

This was certainly true at Kodak, who invented the first digital camera in 1975. However, the company shelved the innovation because it was a threat to their lucrative film business. While Kodak was comfortable innovating the ways its customers could use film to capture their memories, the company’s executives were unable to envision what their business could look like without film.

We can only imagine what might have become of Kodak if their managers had the wherewithal to think differently. An innovative management mindset might have leveraged rather then buried their engineering talent, and perhaps Kodak might have delivered the breakthrough innovation that became known as the smart phone. Instead, they were a victim of disruptive innovation as Apple became the most valuable public company in the world on the strength of its breakthrough product.

In assessing the impact of the emerging digital revolution, the late management guru Peter Drucker astutely observed that if you don’t understand innovation, you don’t understand business. In a post-digital world, the business of business is innovation. And the true work of innovation is not about making the possible incrementally better, but rather about making the impossible possible.

Before the iPhone, the idea of having one device that could serve as a phone, a camera, a music player, and a portal to the internet was beyond our imaginations and considered impossible. What separated Apple from Kodak is that Apple understands that the business of business is innovation whereas Kodak saw the business of business as preserving the status quo. Sustaining current product models predisposes companies for incremental innovation. Making the impossible possible orients businesses for the breakthrough innovations that define the future.

Changing How Companies Think and Act

How can businesses get better at making the impossible possible? Dugan and Gabriel’s solution is to change how companies think and act. They can change how they think by harnessing the leading-edge minds of people within and outside the organization in powerful ideation sessions that use tools and practices from design thinking, lean startup, and collective intelligence dynamics to cultivate the unusual connections that are the genesis of breakthrough innovation.

In these facilitated discovery sessions, participants should be encouraged to look ten years out rather than limiting their thinking to the next five years because the longer time frame makes it difficult to assume that you will be doing the same thing in the future that you are doing today. The outcome from the ideation sessions is a portfolio of ideas for rapid prototyping and testing that favors customer delight over managerial preference.

Changing how companies act is accomplished by creating agile teams that are independent from the mainstream organization. The members of these teams have the freedom to gather customer reaction to each of the ideas, and based on this feedback, decide whether to go forward, pivot, or drop the idea. Once an idea is validated by the market and a compelling case can be made for the new business idea, it can be brought forward into the mainstream organization for full funding and development.

Assembling independent teams and providing them with the space and the freedom to experiment and test ideas directly with potential customers is how companies can learn to create new, sometimes game-changing, and often more profitable ways to create value for their customers.

The ability to think expansively and to act independently are the key ingredients for breakthrough innovation. These ingredients, which are natural attributes for startup companies, are foreign bodies inside traditional organizations. Accordingly, the response to breakthrough ideas inside traditional organizations is usually a full onslaught of corporate antibodies to protect the status quo. But if companies want to be on the leading edge of breakthrough innovation, they have to neutralize the corporate antibodies and cultivate different thinking by building powerful teams that are completely independent and report only to the CEO.

Developing the capacity for breakthrough innovation as a core competency is essential in a rapidly changing world because, while corporate antibodies are highly effective at killing new ideas inside companies, they are powerless to stop these ideas from blossoming in the market. As the pace of change continues to accelerate and market dynamics continue to favor the innovators, strategies to diminish the effects of corporate antibodies are increasingly important to the sustainability of businesses. Otherwise, more iconic companies may experience the unfortunate new meaning of a Kodak moment.

We're in a crisis! Why can't we all just get along?

The four obstacles to corporate innovation