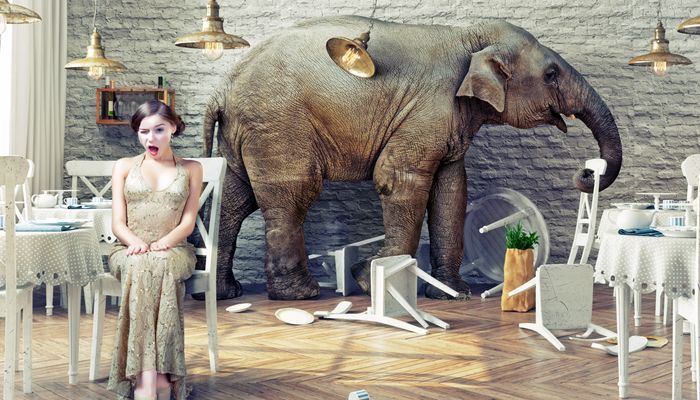 We often ask leaders on programmes to describe what it feels like to lead in their organisation. as one leader put it, “it feels like riding an elephant. I am desperately trying to get this elephant to move in a particular direction, but it has a mind of its own and it goes wherever it wants to, leaving me feeling out of control and hanging on for dear life!”

Does this feel familiar to you?

Peter Drucker’s speaks of ‘yesterday’s logic’, a worldview that the world is predictable, uniform and controllable, that organisations are run like a well-oiled machine, where a leader is assured that if she pushes certain buttons and pulls certain levers, she will get certain results. It also implies that formulas exist on how to manage and managers will continuously look outside for ‘best practice’ - the tried and tested six steps to achieve staff engagement or the five steps to strategy development, guaranteed to deliver results and provide a sense of achievement and control.

Instead we require a new narrative. One which involves the acceptance of the world as complex and unpredictable, and views leadership in a fundamentally different way. Seeing organisations as living eco systems, rather than machines, emphasises the multiple interactions and accompanying feedback loops that constantly change systems and behaviours.

Within these eco systems, the emergence of unpredicted ideas and unexpected behaviour is often influenced by the informal influencers and leaders at all levels of the organisation. This can feel quite different to the planned, top-down change programme envisaged by the senior leader - hence the riding an elephant metaphor.

The 20th Century’s emphasis on freedom of expression and human rights, super-charged by 21st century social media, has further impacted on organisations as ecosystems, as individual views and ideas are now so easily expressed within organisations via social media platforms and organisational intranets like Microsoft Teams or Yammer. As these views are expressed and resonate with many others, they can create often surprising social movements or pockets of energy for certain projects.

A case in point

A large organisation in Africa set out to develop 287 career ladders and competency profiles for all major careers, all written at five levels of proficiency. The aim was to populate them into the SAP HR system to enable leaders to conduct more professional online competency evaluations of their staff against these profiles.

This was an HR dream come true - every job to be been defined in detail, supposedly to make easy for line mangers to do their performance reviews. The project cost the organization millions and took two years to develop.

When the time came for the big project to ‘go live’, a few influential leaders tried it, decided it was far too complicated and said that they were not going to use it. They started talking about it informally with their peers in management meetings and within a couple of months the system was rejected by the majority of the top team as ‘another impractical HR system’.

The outcome was interesting. Two leaders from Engineering shared that they had developed a much simpler competency system a few years back which was working well for them. Within a month the majority of the senior leadership team took it upon themselves to tweak and adopt this system from Engineering for their own divisions - at zero additional cost to the organization.

What does this mean for how we lead?

As Drucker suggests, leading organisational eco systems requires a new logic which is able to embrace the world as predictable, controllable and linear and as chaotic, unpredictable and non-linear. Sometimes the formulas of the past work well to create future success while sometimes they are completely inappropriate to the new emerging dynamic.

Leaders therefore require a capacity to intuitively sense into and even beyond a situation, and to do the most appropriate thing for the moment, always within the context of the web of relationships they are part of.

This implies that a fascinating new set of leadership capabilities are required to navigate the 21st century organisation. These were explored in a research project involving more than 150 senior leaders in multiple industries:

Eco intelligence (Integrating): the capability that enables ‘matrix or integrative thinking’, extracting value from diverse groups of people and technologies by leveraging the inter-dependencies. It creates the needed psychological safety and stimulates generative dialogue and the emergence of new thinking between stakeholders. In order words the capacity to ‘allow things to happen’

Ego intelligence (Shaping) :the liberated ego has the capability to bring the needed focus, boundaries and definition of what needs to be done, the ability to shape things and move them forward with speed; the capacity to ‘make things happen’.

Intuitive intelligence (Sensing) :the capability of sensing into a situation and knowing what is needed, but also sensing beyond the boundaries of a situation to bring fresh perspectives and insights, and ‘connecting the dots’. Intuition manifests as a non-rational deep knowing or gut feeling that is often surprising. The more uncertain the world of work becomes; the more leaders need to develop their intuitive abilities.

We found that a good blend of all three is needed to lead organizational eco systems in the 21st century. The key lies in leadership’s ability to know what is called for ‘in the moment’ and then being agile enough to adapt their style to bring forth the right kind of leadership.

The powerful drivers and blockers of leadership

It's all about systems