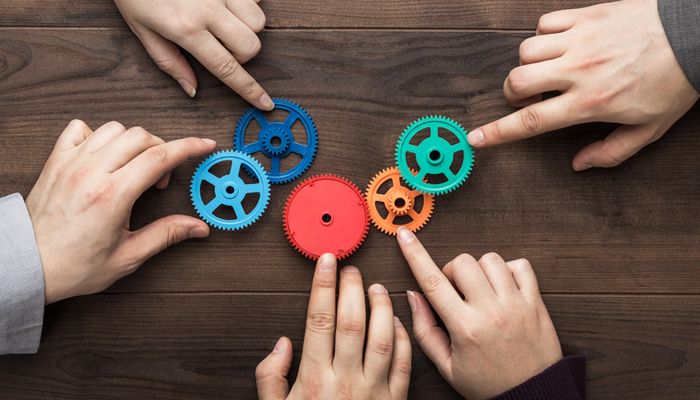 Image from Shutterstock.com
Nov 27 2017 by Rod Collins Print This Article

One of Peter Drucker’s best-known quotes is, “The best way to predict the future is to create it.” This advice has never been truer than it is today as the technologies of digital transformation are changing all the rules for how the world works by displacing top-down hierarchies that amplify the “power of one” with more powerful peer-to-peer networks that enable the “power of many.”

Understanding the job to be done

Perhaps no one has advanced our knowledge on the workings of innovation more than Clayton Christensen, whose many books on the topic have become essential reading for twenty-first century business leaders.

In his most recent book Competing Against Luck, which he co-wrote with Taddy Hall, Karen Dillon, and David Duncan, Christensen emphasizes that the starting point for innovation is often uncovering what he calls “the job to be done.” Whereas most attempts at business innovation often start with a product idea, Christensen urges business leaders to step back and take the time to uncover what problem customers are “hiring” their product to solve. If they fully understand that problem and use that knowledge to guide what products to make, they will not only delight their customers, but they may very well create something that has never existed before, which is the essential task of innovation.

As the structural organization of the world continues its rapid shift from hierarchies to networks, the digital transformation that is driving this transition is not only creating powerful new capabilities, such as the Internet of Things, artificial intelligence, nanotechnology, and robotics, it is also creating unprecedented problems that need to be solved - or as Christensen would describe it, new jobs to be done. In particular, there are two pressing big jobs to be done, which if not solved, could unfortunately mutate digital transformation into digital destruction.

The first and most immediate big job to be done is to transition all IT systems to a new platform that completely extinguishes the “power of one.” In the past couple of months we have learned of more massive security breaches - first into Equifax’s data base, affecting over 143 million people; then Uber, potentially impacting 57 million drivers and users. What’s most alarming is that the number of instances of these types of security failures have become so common, we have almost come to accept them as facts of life rather than as totally unacceptable problems to be solved.

The unpleasant reality is that this problem represents a clear and present danger because the power to create large scale catastrophes is reaching the hands of more and more people as connected technologies become more powerful and more ubiquitous. As connectivity expands, data is becoming increasingly more vulnerable and open to exploitation and irreparable loss of control, e.g., ransomware and increasing identity fraud.

The root cause of this problem is that conventional IT systems, which use hierarchical control mechanisms, are no longer “moated” structures once they are interconnected on the Internet. The combination of hierarchically structured controls in an increasingly networked world is toxic because any smart hacker can use the network to break into most, if not all, conventional IT systems, and once in the system, can easily figure out how to manipulate its single point of control mechanisms, such as passwords. In a hyper-connected world, traditional control mechanisms that act like singular keys to allow individuals to access data are rapidly becoming perilous liabilities.

The continued maintenance of centralized computing architectures in a hyper-connected world is unsustainable because with single points of control, companies are increasingly vulnerable to crashes, fraud, and security breaches. More ominously, the possibility of surreptitious and total surveillance by both government and nongovernment actors is now a reality. These circumstances will get worse, not better, unless we correct for the toxic mix between networked technologies and hierarchical IT structures.

The solution is to replace singular control mechanisms with collective intelligence dynamics and replace the “power of one” with the “power of many.” In other words, we need a networked security architecture for a networked world that requires a consensus among a set of multiple actors to validate an action. This type of architecture would have likely prevented the Equifax breach.

The second big job is to create a new economic engine to preserve the middle class as the number of jobs are dramatically reduced. Society is entering a new phase in which fewer and fewer workers are needed to produce and distribute all the goods and services consumed.

Jaron Lanier, the author of Who Owns the Future?, cites the examples of Kodak and Instagram to demonstrate this phenomenon. Kodak, at its peak, employed more than 140,000 people and was worth $28 billion. When Instagram was sold to Facebook for a billion dollars in 2012, it employed only 13 people.

Instagram’s value doesn’t primarily come from 13 people, but rather from the millions of users who contribute to the network without being paid for it. Today’s networked economy is a form of a feudal system, where many people contribute work but only a small number get paid. This has the net effect of centralizing wealth and limiting overall growth. An economy that fails to compensate the prime contributors of value is not a sustainable system.

Another troubling development is that, for the first time in human history, technology and automation are no longer replacing displaced jobs with better and higher paying jobs. As a consequence, the longstanding Industrial Age concept of a job may become obsolete.

While most of us understand that the technology revolution will rapidly displace all manual jobs with robots and 3D printers, few of us have recognized that automation has begun to displace knowledge and service jobs. If enough jobs are eliminated, the customer base will dwindle rapidly. And if there are no customers, the economy as we have known it may collapse.

Perhaps, this explains why Elon Musk and Mark Zuckerberg have both become proponents for the notion of universal basic income. However, such a notion is a short-sighted solution and an attempt to ignore Albert Einstein’s sage insight that, “We can’t solve problems using the same kind of thinking we used when we created them.” We are surely capable of a more creative and a more reliable solution.

The real problem is not the disappearance of jobs, but rather the disappearance of the primary mechanism for compensating people for the value they contribute to the overall economy. The notion of a universal basic income is short-sighted because it separates compensation from value contribution. The real issue is that, in these early years of a digitally transformed world, nobody knows how to value contributions in a networked information economy. The traditional concepts of economic value are rapidly becoming obsolete in a hyper-connected world. Plant, property, equipment and labor are no longer the meaningful categories of value. They are being replaced by data, information, intelligence, and contribution.

If we want to preserve the middle class, we need to change how the economy works. We need to create new economic mechanisms that can accurately, fairly, and sufficiently measure and distribute economic value across the broad population of all network contributors. In the new economy, most traditional labor will indeed be accomplished by robots, 3D printers, and artificial intelligence, and the economic value of individuals will no longer happen in the context of a job, but rather in the context of their contributions to networked activity. Because traditional accounting models were not designed to measure the value of data, information, intelligence, and contribution, we will also need a new accounting paradigm designed for a post-digital economy.

Developing a new practical paradigm of economic value as well as the means to equitably calculate the contributions of individuals who participate in value-generating networks is the biggest economic challenge of our times and the necessary solution to preserving the middle class. Fortunately, while digital transformation has created these perilous circumstances, it has also enabled the creation of a new relatively unknown tool - Blockchain - that may very well be the right platform at the right time to solve both of the two big jobs to be done. More on this next month.

Social media: how did we get here?