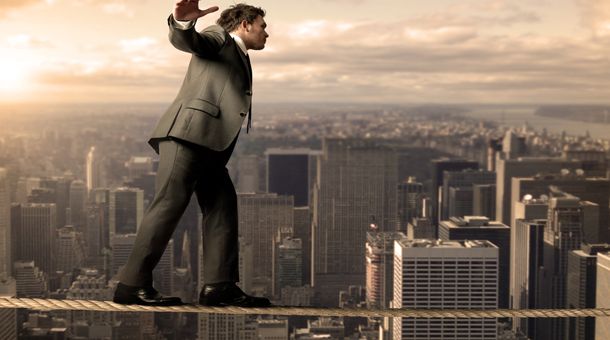 Image from Shutterstock.com
Dec 01 2016 by Duane Dike Print This Article

I really am fortunate to have worked for the same company for over 30 years. Those kinds of years are a blessing bestowed on many of us from, well, 30 years ago. We entertained, built airplanes and cars, and worked for cities and universities. We were productive. Even during the high inflation years of the early 1980s, our jobs were relatively secure.

But something Went Wrong. Along came layoffs. No drastic loss of jobs (unless you’re the one who lost his or her job), but enough for everyone to take notice. Even for the people secure in their jobs, a level of apprehension sets in. And this apprehension is a long-term thing, hanging over folks for years. Even if only one person is laid off, others will begin their own query into who is next and when. It turns into a vicious circle of doubt.

Sadly, as I’ve mentioned before, the blame for business troubles almost always falls on the people who do the work, not the executives, the ones who make millions. Frankly, the people laid off are simply the symptoms of the disease. The real illness lies at the top of the pyramid where decisions are planned and made. Those decisions are what cause either wonderful success or terrifying collapses.

Workers are not usually the big decision makers. They lend opinions which are sometimes listened to, but the decisions land with the bosses. And, if a boss makes bad decisions which cause a company to lose profits, then instead of laying off workers, it’s the boss who should choose to quit.

And the Award Goes To…

What’s interesting is that we’re seeing more of this kind of behavior lately. Executives who made bad decisions are leaving banks, movie companies, and automobile manufacturers. However, these quitters are only leaving because they made such huge mistakes (or even indulged in deliberate wrong doing).

The problem, though, as with Wells Fargo, is that it isn’t just shamed executives falling by the wayside; thousands of employees are also losing their jobs, too. And, the bank will most likely suffer long term maladies, perhaps even drilling into the depths of irreparable collapse. Wells Fargo was once the wonder of the banking community with commercials showing stage coaches riding through troubled lands. Oh, well…

So, what can we do to stop these problems? I’m not really sure. Despite regulatory systems trying to ensure that everyone is honest, it seems that more and more people are testing those systems. Greed, rooted in selfishness, is at a highpoint when leaders search for ways to buck the system or make bigger and bigger profits (Volkswagen is a prime example).

Perhaps the answer comes in two parts. One, the simplest, is to educate all employees in how to do things right, to notify bosses and HR of things that don’t seem right, and to ensure the company plods down legal paths. (How this task is completed is much too complicated to discuss here.)

The second point is that employees should not fear reporting things that don’t seem right. This is a fundamental agreement between workers and bosses, to hold our bosses pure. Some indiscretions can be reported to the bosses themselves, before they become huge, possibly illegal, issues. Other observances, when they appear to be slightly different from typical indiscretions, should be reportable to an appropriate HR person, someone outside the daily functions of the operation. Large companies can hire flocks of these people. Smaller companies can work with someone on contract. Either way, having a third person to discuss things with is becoming a necessary evil in business.

My hope is that big businesses will continue to strive to clean up their acts. Yep, that’s my hope. Will my hopes come true? Probably not. But as individuals, every one of us can do our utmost to make sure our own working worlds are as clean as possible.

The times they are a changin'

Making sure not everybody hurts

How to avoid death by a thousand cuts

Cut in haste, repent at leisure