Which Steve are you? 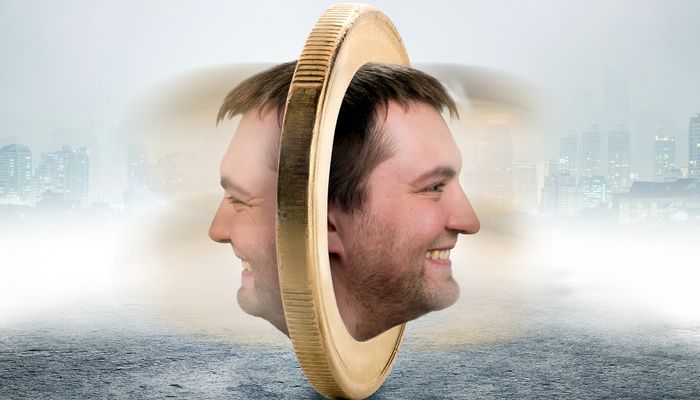 Two sides of the coin from Shutterstock.com
Jun 02 2016 by John Blakey Print This Article

In the film 'Steve Jobs', there is a tense stand-off between Apple co-founders, Steve Jobs and Steve Wozniak. The scene is prior to an Apple product launch and Wozniak is berating Jobs in the middle of a theatre rehearsal. Frustrated by Jobs' stubborn and arrogant nature, he throws his hands in the air, turns and walks up the aisle to the exit. Then he pauses, spins on his heels and shouts out, 'It's not binary you know, Steve. You can be decent and gifted at the same time'.

The film reminded me of an incident in my corporate career when I had been appointed to my first managing director role. I was three weeks into the job and walking down the corridor of the sixth floor HQ. Coming towards me was the CEO.

“How's it going, Blakey?” he bellowed.

“It's going fine,” I replied. “Yesterday, we signed the largest deal we have ever done in the sector.”

“You think that's good, do you?” was his curt put-down. And then I got what was always coming. “You know your problem Blakey? You're too nice!”

And with that, the CEO in question marched off leaving me dazed and confused by the exchange.

Too nice for what? Too nice to get to the top without cooking the books? Too nice to lead a team without stealing their energy along the way? Too nice to be decent as well as deliver results?

Well, that day, I vowed to conduct an experiment; an experiment in being nice, in being decent and in still delivering outstanding results at the same time. Every day that I got on a plane at some unearthly hour to visit a client, or a business unit or a future partner, the fire that motivated me was to prove my CEO wrong and to prove Steve Wozniak right.

Three years later, I was back in the same corporate HQ being grilled on the end-of-year results of my sector. At the end of my short presentation, the boardroom fell silent. All were expecting the usual blood-on-the-walls-lamb-to-the-corporate-slaughter drama. But today was different. My CEO leaned forward and said, “I don't often say this but.... well done, Blakey”.

Maybe there's not going to be a film called 'Steve Wozniak' and there certainly won't be a film called 'John Blakey'. Hollywood will have to wait. But how many 'Steve Jobs' are there out there for whom there will be no film either? No redeeming epitaph to justify a career of wanton cruelty, point-scoring and low-level-larceny. A nasty career with no end to justify the meanness.

It seems to me that we choose what we want to believe in. And, if that is the case, we have to choose whether we live in the world of Steve Wozniak or the world of Steve Jobs. Which Steve are you? Jobs was famous for his 'reality distortion field'; his ability to make the world conform to his own thoughts and opinions. Yet all beliefs operate the same way. All beliefs are, to an extent, self-fulfilling. We see what we want to see. That is why it is important to review the following three statements and decide where you stand:

That is why this is such an important question: Which Steve are you?

The myth of the super-manager

Dealing with a dominant CEO

Who's afraid of your opinion?