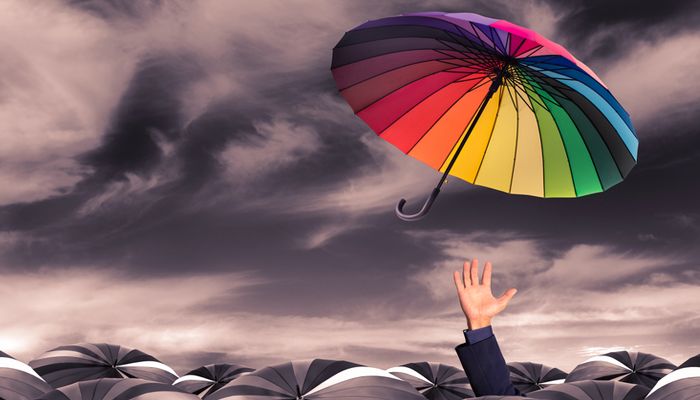 Rainbow umbrella in a mass of black umbrellas from Shutterstock.com
Nov 26 2015 by Michael Jones Print This Article

The last line of William Stafford’s poem ‘Vocation’ reads: “Your job is to find what the world is trying to be”.

The words ‘vocation’ and ‘voice’ come from the same Latin root, vocare, which means ‘calling’ - as in following what we are uniquely called to do. And as we try to discover how to lead in an unpredictable world, we also discover that there is within the unknown a hidden power. This power connects us to our own inner call including a greater understanding of what we are essentially called here to do.

As an improvisational pianist, I play along the fine nerve of the unknown in every moment. And that also leads me to instinctively take a poetic line and explore its various melodic possibilities. So Stafford’s line could also be interpreted as saying, “Our job is to discover what our life is trying to be”.

Implied in this question is that there is a natural order to how things unfold that will lead us to the things that really matter - poems, music, leaderful actions - that life knows what it is doing - as long as we don’t interfere.

Stafford was a master of living with the unpredictable. And he also understood the organic nature of change. He noticed that often progress in his own creative work was through taking small and almost imperceptible steps. But by accepting and appreciating these small offerings he was also alert to the likelihood that something larger would come to him later on.

In this spirit of unconditional acceptance, every offering was significant. He also acknowledged that it is difficult for impatient people to write poems or to lead well because their critical mind will snuff these small seemingly insignificant moments long before they could gain sufficient traction to become something more.

Stafford believed that to be connected to this natural order we needed stay in alignment with what is already unfolding. That is, to be careful to distinguish between what is occurring naturally from what we believe ought to be happening. When Stafford did this - asking what these fragments of thoughts, patterns and images where trying to say - poems came to him freely and abundantly.

For leaders this means that instead of trying to impose their will based on what they believe ought to happen, they need to maintain a heightened state of attention to recognize what is already alive in the situation and emerging naturally.

Though the future cannot be predicted, it can be imagined and felt. So rather than avoiding surprise, leaders can instead embrace uncertainty and learn from the unexpected by being open to subtle sense impressions that they may not yet fully comprehend.

In this spirit Stafford was a prolific writer, crafting poems almost every day. In doing so he adopted this stance of seeing significance in everything as his daily practice. Given this prolific output, he was once asked what happened when he wrote a bad poem. “I just lower my standards!” he replied.

This idea of lowering our standards is difficult to accept in a performance- driven world where standards are used to measure almost everything. The accepted practice is to raise our standards, not lower them.

But Stafford used the word ‘standard’ in a very specific way. You could say he lowered his standard in the same sense that medieval flag bearers lowered their standard to convey their intent of yielding and as a gesture and invitation for a dialogue. In his creative world by lowering his standard he was making peace with - and entering into a dialogue with - his muse.

He was also rigorous in another way. To embrace uncertainty we need a central image that can serve as a beacon, something we can return to whenever we get lost, something that helps us hold faith in the future as we cross uncertain ground. For Stafford, this image was the golden thread.

Stafford wrote before first light each day. Taking a sheet of white paper out of a slender box he would start by jotting down imperceptible things that had caught his attention - a fragment of a dream, a scrap of conversation from the previous day, a phrase from a recent reading. And so he ventured into each day holding his pen as if it was the end of a golden string and with this he followed the thread into the poem he was to write that day.

There’s a thread you follow. It goes among
things that change. But it doesn’t change.
People wonder about what you are pursuing. You have to explain about the thread.
But it is hard for others to see.
While you hold it you can’t get lost.

This image of the thread (Inspired from a poem by William Blake which begins with the line, “I give you end of a golden string”) reminds us that in those moments when we are most uncertain and confused and don’t know how to proceed - we can take hold of the thread. And hold it lightly because if we tug too hard it will break. And once broken it is difficult to find again.

While we may not have a strategy or plan to lead us forward, we do have a thread. And when we take hold of the end of this golden string, it will lead us through the things that change.

William Stafford always knew he was onto something when the thread began to feel alive in his hand. When we follow the thread we are also connecting with the roots of our own aliveness. When we follow this thread of aliveness we will through the passage of time discover that the thread is leading us to place we may recognize as home - after we have arrived.

Leadership and the curiosity quotient

The times they are a changin'