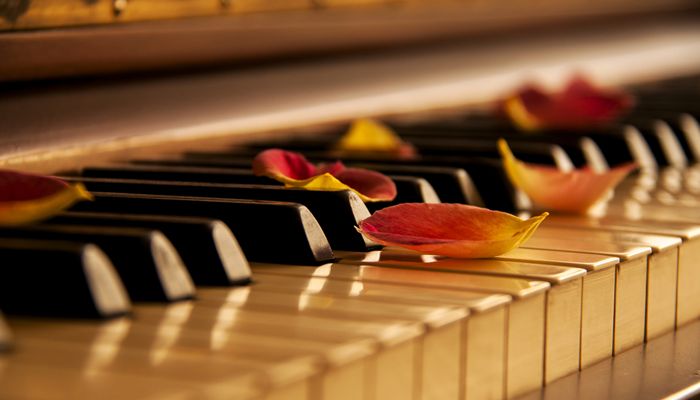 Rose petals on a piano from Shutterstock.com
Oct 28 2015 by Michael Jones Print This Article

Several years ago I was in a conversation with John, a senior executive responsible for marketing and sales with a global pharmaceutical company. The purpose of our conversation was to explore the relationship between artistic practice and leadership.

We had been talking about these ideas for several months and our conversations often took place not at his office, but on long walks along the wandering pathways of a lakeside park. As we talked, the wind, the light and waves and the cry of the gulls served as a third partner that animated our discussions.

On one of our walks John started the conversation by asking what it means to create respect in the workplace.

“When I think of respect,” he said, “it seems to involve a shift in our attention from goals and outcomes to a reverence for each moment. Reverence opens the way to respect, and it is difficult to generate respect when your mind is focused primarily on achieving a narrow set of goals - everything becomes instrumental to that end and nothing else matters.”

He was absolutely right. The root of respect means to ‘look again’. When we pause to take a second look, time stands still. Nothing else matters but holding reverence for that moment. The future and the past all seem to fold into that one moment in time. And as a musician, I know that it is being in that moment when we no longer just hear notes on the piano when the music really begins.

John asked me for an example of what I meant and I recalled a piano concert I attended early in my time at university. It was performed by jazz pianist who opened with a composition titled; ‘I Can’t Get Started.’

What I remember most what how much life was contained in hearing his first three notes. Those notes had such a quality of reverence to them. And I think the reverence came from the respect he had for his audience, for his fellow musicians, for the piano, for the concert hall - for the rainy wet weather outside - everything was held in this field with reverence. It is as if he had brought all of his life experience and concentrated it into these first three notes. And if you get these first three notes right then everything flows naturally from that.

It was an experience not unlike that echoed in the words of Bob Dylan, who said of Woody Guthrie, “you could listen to one of his songs and learn how to live.”

John and I paused for a time and watched several gulls riding the waves out on the open water. The wind had become stronger since we had started our walk and large waves were now rolling up along the beach close to where we were standing. “For me,” John said “this is where the life of the leader and the artist intersect. I think of leaders who are so present to the moment and hold you in such respect that when you are with them you feel as if you’re the only person in the world. In that regard leaders can learn a lot from artists about respect for the moment, of pausing and listening for the spaces between the notes.

“In leaders’ terms, it’s the space between the words. Sometimes leaders are so focused on outcomes that they can’t leave space to listen to and be fully present to other points of view. Their mind is already made up. You are simply a means to an end. They know where they want to go and only want others to help get them there.”

“That’s what most impressed me with that piano concert,” I replied. “He wasn’t trying to get somewhere. Too often we miss the opportunity of dwelling into new possibilities that listening deeply into the moment might bring. If one leadership story is focused around realizing goals, there is another, a more artistic way of leading that is connected to the on going flow of experience. To find these moments we need to step off the path of our own habits and routines.”

The poet W.S. Merwin observed: “If you can get one moment right, it will tell you the whole thing. And that’s true of your own life. Each moment is absolutely separate and unique and it contains your entire life.”

And this attention to the moment also influences our own way of seeing. We can either look upon our world as an object - separate, lifeless and inert - or we can view it as a living presence that is constantly unfolding, each moment absolutely unique and full of possibility and each part also holding within it the larger pattern of the whole.

Soil, growth and the art of conversation

Listening skills: what I learned from a primate

Why we only listen to what we want to hear