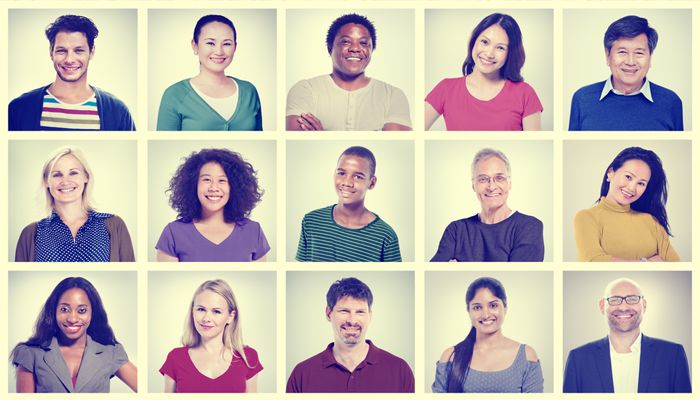 Collage of faces from Shutterstock.com
Sep 23 2015 by David Livermore Print This Article

I welcome the way many organizations have broadened the definition of “diversity” to go beyond skin color and nationality. Diversity of thought, work style, function, age, and much more are all relevant forms of difference. But not all diversity is equal.

Visible diversity refers to those differences, which can immediately be observed when looking at someone. This includes differences that stem from ethnicity, gender, age, physical disabilities, and sometimes religion (such as a woman wearing a head covering). It’s very difficult to disguise these differences and as a result, they immediately influence the snap judgments that are made.

An individual with low cultural intelligence (CQ) may claim that these visible differences are irrelevant to him. Did she do her job competently or not? But thousands of studies consistently confirm that we implicitly favor people who look similar to us. It’s not so much that we feel explicit hatred or dislike toward others, it’s that we reserve our admiration, sympathy and trust for our in-group.

What’s remarkable is how slight the similarity needs to be for a sense of trust and attraction to occur. Brett Pelham is renowned for his research on this tendency to favor people with even the slightest similarities to ourselves. For example, women are more likely to marry men who share the first letter of their maiden name. People named Louis are more likely to live in St. Louis, just as people named Paul, Mary, and Helen are more likely to live in St. Paul, St. Mary, and St. Helen. So when we see people who “look like us”, our default response is to view them as more trustworthy than individuals who look different from us.

This is why the research and training on unconscious bias is incredibly relevant for developing cultural intelligence. By becoming more aware of our unconscious biases, we can better manage our implicit assumptions.

The second form of diversity that is most relevant is any person from a culture that is under-represented in a group, something that has been termed ‘tokenism’. Tokens are members of a subgroup that represent less than 15 percent of the whole group and the disproportionate representation skews the ways they’re perceived.

Being the only Southerner on a team of Northerners, the only marketer on a team of engineers, or the only “foreigner” in a department highlights cultural differences that might otherwise be overlooked. The dominant group will be inclined to assume that an unusual behavior by an individual from an under-represented group is “cultural” but that might not be the case at all.

Humans of New York recently featured a young Pakistani woman who describes her experience studying at a small college in Minnesota:

“I never feel completely at ease because there are only three Pakistanis at my school, and I feel that everything I do reflects on my family, my religion, and my country. I feel pressured to always be exceedingly polite and well behaved, even when I don’t feel like it…[in Pakistan] I feel like my actions only reflect on me.”

Many individuals reflect both forms of diversity, such as being the only person of color on a team, and thereby finding yourself to be both visibly different and as one of the under-represented team members. But under-representation is also a factor for people with cultural differences that aren’t as visible, such as a having a sexual orientation, ideology, socioeconomic status or level of tenure that deviates from the dominant norm in a group. An under-represented group could also be a majority group that has limited power and voice, such as what black South Africans experienced for many years.

What ultimately matters is not the source of diversity but the different values and perspectives that emerge from it. The more diversity you have within an organization, the more ideas there are for how things should be done. The differences that most strongly influence innovation, project management, and accomplishing objectives are the varied approaches for communicating, planning, and executing tasks. How do you align the values, expectations, and work styles of four generations, dozens of nationalities, and endless subcultures toward a universal vision and strategy for the organization?

Answering that question is at the crux of our work on cultural intelligence because our interest has been to improve effectiveness working across cultural value differences. And it’s why our CQ Assessments include feedback on one’s individual cultural value orientations.

A broadened understanding of diversity is useful. Just beware. If diversity includes everything, it ends up meaning nothing. Organizations that intentionally develop a strategy for drawing on the insights and perspectives of staff who are visibly different and under-represented have a key advantage for knowing how to effectively serve culturally diverse populations.