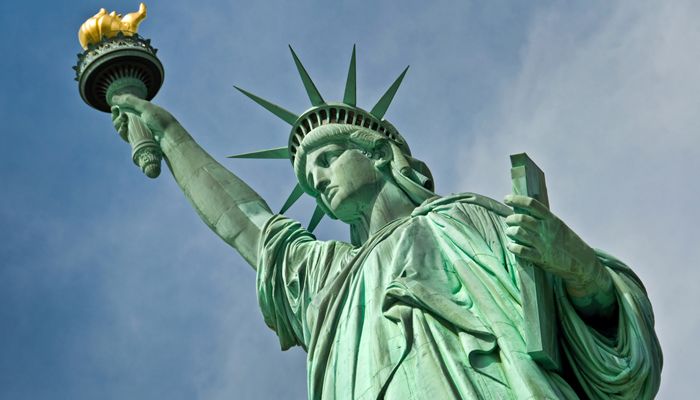 Statue of Liberty from Shutterstock.com
Aug 04 2015 by Janet Howd Print This Article

Some years ago I was asked to illustrate a lecture on the Walter Harding collection of 19th Century popular songs that is housed at the Bodleian library Oxford.

Performing such songs as “Aura Lee” (the tune Elvis Presley later borrowed for “Love me Tender”) and (the lengthiest-titled song I have ever sung) “She’s Good Enough to be your Baby’s Mother so She’s Good Enough to Vote With You!” caught my imagination and I went on to research the collection and put together a lecture recital relating 19th Century European visitor’s comments on the evolution of America’s social history between 1830 and 1860.

I write about this because the world’s news is currently full of stuff about how demoralized Western society is likely to become if too many emigrants are allowed to infiltrate it. Yet all humanity immigrated from somewhere at some time. And as one piece of 19th Century sheet music I found reminds us, the attitude of those already settled has always been a problem for would-be newcomers.

Only an emigrant, son of the soil
with my hands ready for labour and toil
willing for anythig honest, I be
surely there’s room on the prairies for me?
Room for the arms that will reap and will sow,
striving and thriving the best that they know,
there’ll be success in the future for me
only an emigrant though I may be.

Only an emigrant, so be my name.
hundreds today bearing honour and fame
bore that same title in years long before,
landing, like me, on America’s shore.
Up fortune’s ladder they crept from the ground
higher and higher and round after round.
What some men have done so another one can
only an emigrant - but yet a man!

“America is a refuge for those who have left their own country for their own country’s good.”/ “ A receptacle for the barbarous, vicious and degraded of all nations!” (Comments recorded in the travel diaries of Fanny Kemble and Isabella Bird.)

“All Europe is coming across the ocean. All that part at least that cannot make a living at home; and what shall we do with them? They eat our bread, encumber our streets, and not one in twenty is competent to keep himself”. (Comments recorded in the NY press in the 1840’s mirroring those of UK and European reporters today.)

That song and those comments were set down on paper more than 150 years ago, yet, as we all know, far from being damaged by immigration, America went from strength to strength.

So my question for those of you who would dismiss the humanity clamoring at our doors today is this. How come, that Big Data - now so high on the agenda of everyone who wants to be anyone in the commercial world - is thought to be of such enormous benefit to mankind whereas Big Populations are dismissed out of hand?

Please look back at the final verse of that prophetic song and think again, because all of us are needy when we arrive in this world.