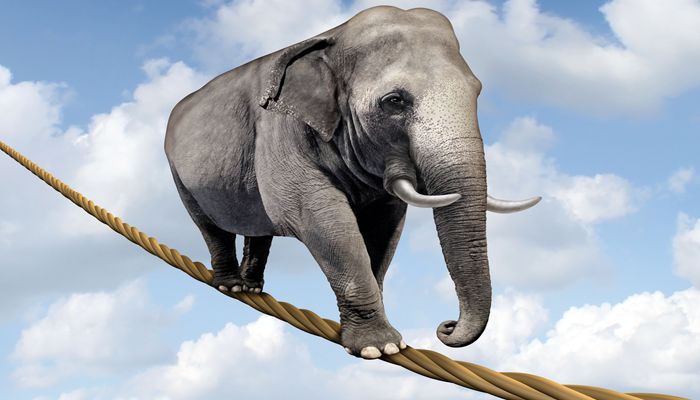 Elephant on a tightrope Shutterstock.com
Jun 18 2015 by Michael Jones Print This Article

The things that really matter to us sometimes seem impossible and unobtainable. When I am creating a solo piano recording or giving a leadership presentation or writing a book I sometimes think to myself, “this is impossible”.

But it will be impossible if we believe that what we are doing or creating must come from our own will alone. To achieve our goal, something needs to come out of a place we don’t know about and have little or no control over. It is this ‘something other’ that transforms struggle and effort into moments of grace and free play. In this context there may be a paradox, in that it is when we don’t have all the answers that we exceed our expectations and so the impossible becomes possible to achieve.

The American Poet Laureate, W.S. Merwin, noted: “all things that really matter to us are impossible. You know they say that (poetry) translation is impossible. Sure it is. We do it because it’s necessary, not because it is possible.”

These words brought to mind a conversation I had with David, a senior leader, consulting client, colleague - and an aspiring pianist.

“When you sit at the piano, how do you play?” he asked me one evening after dinner at my home. We had moved over to the piano bench and he was watching me as I played.

His question seemed impossible to answer, like a centipede being asked how it walks!

“When I try to play the piano” David continued, “I need to know which chord I am playing and which chord comes next. It feels very slow and awkward.”

As David spoke I recalled my own struggles transforming a few seconds of spontaneous flow into minutes and perhaps hours of free play. But as soon as I asked myself how I was doing it, the flow stopped and the magical experience came to an abrupt end.

German Poet Rainer Maria Rilke once observed, “it is not caution but a wise blindness” that enables us to tap into this deep current of free-flowing, spontaneous expression. But it is difficult to embrace this ‘wise blindness’ when each musical note is deliberate and needs to be thought-out in advance.

So with Rilke’s words in mind, I invited David to join me as I played. My words had hardly left my mouth when he tensed up.

“This is not a performance,” I reassured him, “it’s just an experiment. There are no wrong notes. It’s just an opportunity to be present to the process of creation and present to a greater unknown.”

Then I invited him to play, emphasizing that he soften his vision and feel into the keys. In learning to trust and follow the leadings of his fingers, I hoped he would also realize that the vulnerability and openness he is experiencing is where he would also find his greatest strength.

Initially he played from memory, his eyes focused in front of him as if there was music on the stand. The complicated musical structures he worked with did restrict his movement. Ideally the structures we work with should enable rather than impede the natural and organic flow of energy at the musical instrument - or with anything else we choose to do.

But David struggled as he tried to execute a passage, insisting that his mind must dominate his hands.

If I had one gift to offer David that evening, perhaps it would be to help him to feel the music instead of thinking about it. And as I considered how to share this gift with David, I also considered how this had worked for me.

From a young age, I discovered that to feel the music and sustain its spontaneity involved being attentive to what felt most alive and most engaged my imagination while I played. This involved learning to be at home with the uncertainties within myself and within my immediate world. To achieve this also involved a certain forgetting or letting go of oneself - that is, of stepping out of my own way so that the inner necessity of the music could flow unimpeded by my conscious and deliberate thought processes. And this occurred very naturally when the aliveness led me to become fully absorbed in what I was playing.

This complete absorption in the work itself helped me realize that so much of what we create, in whatever we are doing - be it leadership, teaching, living or art - comes from a place unknown to us. It is natural to feel uncertain because the insights we need are not always visible to the linear mind.

And this may also be the key to engaging the art of impossibility. That is, to be open not only to what we know, but to what we feel. In the same vein we may ask ourselves what called us to leadership or to teaching or to art in the first place. This first flame connects us to something deep and visceral inside, something that is saying to us, “I am doing this not because it is possible but because it is necessary. This is what I came for. This is what I am here to do.”

With this in mind I suggested that David close his eyes and imagine he was rediscovering the piano keys for the first time. Just go with the feeling and let the sounds and music take the lead. David hesitated for a moment and then he i>really started to play. His transformation was a joy to watch. His hands freely roamed the keyboard creating beauty unrestricted by the habits of mind that had inhibited his expression so much before.

It was some time before David brought his music to a natural conclusion. When he finished he just sat there for a time. And when he did look in my direction his eyes were bright and sparkling. “That was impossible!” he said. Then he asked, “but could I do the same thing again?

“ Well maybe not exactly the same” I replied. “ We don’t step into the same waters twice nor can we repeat a state of mind.”

But when we engage the art of impossibility we draw our authority not from a body of content and expertise from the past but from a living process of thinking and feeling as it is made in the moment, a process in which new insights come forth afresh in our speaking, leading, teaching and playing as we need them from a source unknown to us, and not a moment before.

As we lead in an age of volatility and change, we need to dig deep for fresh responses. That is the leader’s work now. To master the art of the impossible and, in so doing, to achieve what we did not think it was possible to do.

Can a coin help to rebuild employee engagement?

The music of leadership

Leadership and the curiosity quotient