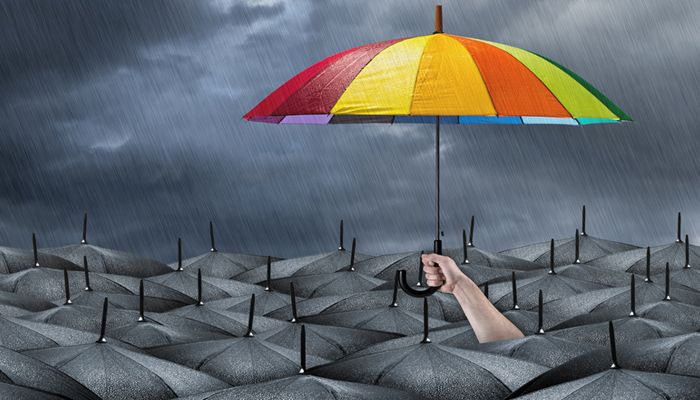 Colored umbrella in a mass of black umbrellas from Shutterstock.com
Feb 11 2015 by Duane Dike Print This Article

Culture is one of those intangible realities we humans conjure to add order to our lives. It isn’t tangible like something you touch but it might as well be. How we understand culture depends on frame of reference, such as in-group and out-group perspectives (and stereotypes). I live in California, so my understanding of my state culture is different from someone who, let’s say, lives in London. The difference of perceptions isn’t bad or good, just different.

Cultures can break down to innumerable sub-cultures, like increasingly tighter groupings in concentric rings, with each of those rings connecting and disconnecting with innumerable mutually exclusive and inclusive rings. Generally, the smaller the ring, the smaller the group. Members of smaller groups tend to form tighter cultural identifiers.

The definition of culture is fairly straightforward, although I doubt any two humans interpret it the exact same way. Cultures are a product of learned and shared assumptions of a group. How culture is interpreted guides group members through external adaptation and internal integration. Although culture is a product of evolution, it is valid for the moment and can be taught to newcomers. Basically, cultures are learned attitudes and behaviors that can influence the way members and outsiders think about and respond to group stimuli.

Over time, perception of culture can morph, appreciating or depreciating in how he/she values the group, possibly resulting in changes in behavior. For example, if a worker’s perception of organizational culture depreciates from positive to negative, decisions to terminate employment can escalate (even if termination never occurs).

The theoretical framework at play here is employees are less likely to terminate employment when local supervisors behave in ways that are friendly, supportive, collaborative, and fun. When supervisor behavior isn’t perceived as friendly and supportive, value perception of the culture is damaged. When things start to decline, all havoc jumps in, changing morale, workmanship, productivity, and turnover.

Because this phenomenon known as culture is difficult to understand, even for the most theoretically minded, I asked a partner-thinker to define culture in a non-business perspective. That person: a Ph.D. student of ethnomusicology (also known as my daughter). From the perspective of this student of the arts, people don’t exist in vacuums but are products of or identified by their assumed or assigned cultures. So far, so good.

Continuing, ‘thinking’ cultures are personified by how people view art, whether music, theatre, visual, film, whatever. Art, per this student, is a window to creative minds, a snapshot of what they see. Since art and history go together, the study of art is a good way to study history and, therefore, culture. Her studies are not so much ‘music and culture’ but ‘music AS culture’.

Like in the art world, we in the business world tend to identify ourselves with whatever cultures we happen to be members of. Oh, groups like the assembly line crew, the line operators, security officers, management (one of my favorites because management, an anthropomorphism, can be interpreted so many ways by so many people), shipping and receiving clerks, maintenance crew, cafeteria workers, and so on. Therefore, as the Ph.D. student defines music as culture, the behavior of each working group called out above personifies its own culture.

Returning to a leader context, bosses who respect employee quality of life tend to be viewed as friendlier and more accepting of diverse thought. In the working context, quality of life, another intangible concept, is represented by the presence of learning opportunities (keep jobs fresh), variety of work (still fresh), meaningfulness of work (the purpose), mutual respect and support, and autonomy. Boss behavior, good and bad, may be the single most influential factor effecting in-group behavior and attitudes, or as in the previous examples, culture.

How is culture learned?

Continuing on a working theme, perception of culture is transferred to newcomers through relationships with bosses and co-workers via formal and informal training. Formal training is indoctrination communicated via literature, classes, signage, one-on-one talks, physical office and building layout, amenities, corporate brand, and the like. These things represent intended organizational culture.

If the transfer of intended organizational culture precepts goes wrong, it’s usually because of burps in informal training. This is where behavior of bosses and co-workers comes in. Over time, bosses and co-workers create their own sub-cultures (behaviors) with unique identifiers that may not accurately reflect intended corporate culture.

How we humans adopt culture, especially from informal routes, gets messy. No two humans are the same. Every human thought is unique. Each human learns, assimilates, and therefore works, differently. Some humans are negatively primed, others positive. Some put in an honest day’s work, some skate through. Some are smart, others - let’s be honest - not so smart. Some learn intangibles well, others need literal definition and training.

The good news is bosses can intervene and keep cultural identifiers positive and productive. Bosses who are present and project positive behaviors tend to foster desired cultures of collaboration, support, and comradeship. Bosses who form strong relationships (often personal ones) tend to create less stressful environments. Productivity and job satisfaction increase when unnecessary stress is low (although some stress is good, some not so good). Caring relationships are only possible through frequent interaction between members of the group, including with bosses.

All this talk of organizational culture, productivity, job satisfaction, personal identification, and responsibility boils down to one causal factor: boss behavior. Knowledgeable and empathetic leaders are critical components of healthy cultures, environments, and systems. Regular and systematic connections between supervisors and workers, especially with newcomers, correlate to positive results and increased retention. Leadership is a verb, not a noun.

“If you are lucky enough to be someone’s employer, then you have a moral obligation to make sure people do look forward to coming to work in the morning.” [John Mackey, Whole Foods Market]

A Christmas gift that lasts all year round

Leadership Is a journey, not a destination

Leadership and the power of the imagination