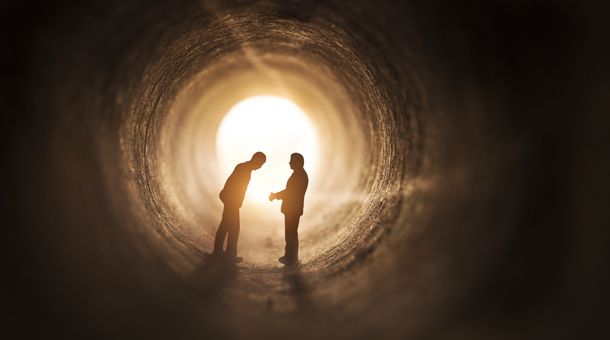 Image via Shutterstock.com
Jan 14 2014 by David Livermore Print This Article

Sometimes we spend so much time deliberating over the ideal skills for cross-border negotiation and inter-cultural communication that we overlook one of the most important ones: small talk. What you say during a formal interview or meeting is important. But your overall likeability and trustworthiness may more likely be judged based upon your informal conversations in the elevator or over lunch.

Some dismiss chit-chat as an unnecessary and annoying waste of time. But casual conversation is an essential part of connecting with friends, colleagues and people we've just met. And informal interactions are when we often experience the greatest sense of cultural differences.

What questions are appropriate?
Should I say anything about what just happened in that meeting?
Should I share this about myself?
Is it okay to ask about his/her family?
Will they understand this humorous reference?
How am I supposed to eat this?
In an increasingly multicultural world, it's impossible to learn the do's and don'ts of appropriate chit-chat for every culture you'll encounter. And even if you did, those stereotypes might not apply to your conversation partner. But there are few things we can do to engage in culturally intelligent chit-chat:

1. Prepare like an introvert going to a cocktail party

I was amazed when I learned that many introverts prepare for a social gathering by planning possible conversations ahead of time. Anticipating who would be there, what they could ask, and remembering various details of their lives is a social coping strategy utilized by many introverts.

All personality types will be well-served by using this kind of approach cross-culturally. If you know you're going to be interacting cross-culturally, spend some time to think about what and how you should communicate. The ideas that follow are part of what you can do as you prepare.

Draw upon your understanding of cultural norms and your ability to read cues in the midst of conversation to monitor the following areas:

Silence: Many personalities and cultures fear the "awkward silence". For some, "silence" suggests there's not much chemistry or interest in the interaction. For others, silence during a conversation is golden. It allows time to reflect and simply be in each other's presence.

Anticipate the meaning of "silence" for your interactions. Don't panic when things get quiet. But for those who prefer silence, realize that excessive periods of silence will be unnerving for individuals from many cultures.

Social Distance: In egalitarian cultures, an administrative assistant asking a visiting executive about his weekend is simply viewed as warm and friendly. But in a more hierarchical culture, most people prefer that authority figures remain socially distant from subordinates and vise versa.

Monitor what level of personal disclosure is appropriate for your cross-cultural interactions. In some cultures, openly sharing about one's divorce, even to a complete stranger, is viewed as endearing and personable. In other cultures, that kind of disclosure is reserved for the most intimate of friends, and sometimes isn't revealed for several years.

Family or Work: To what degree are work and professional accomplishments core to most people's identity in this culture? In many Western cultures, asking "What do you do?" is the most comfortable way to begin talking with a stranger. But in many other cultures, a discussion about one's family name and background is a better way to make connections. Beware of assuming someone has kids or is married and look for subtle ways to pick up on whether family or work is a better topic of conversation.

Harmony or Debate: The norm in some cultures, such as many Germanic ones, is to have a vigorous debate about politics or even religion. You demonstrate your credibility and likability by being able to hold a position and debate it thoughtfully. In other cultures, politics and religion are taboo, particularly among new acquaintances. And in still other cultures, a harmonious interaction with limited conflict is really important, particularly among new acquaintances.

Before you engage in sarcastic banter or challenging someone's idea, monitor what that will communicate to everyone involved. Even if you're being sarcastic with your same-culture friend, it may send off a different signal to others as they observe it.

Where do you get the information to help you monitor the areas listed above? You can start with resources like Hofstede's cultural values dimensions, or our recent book, Expand Your Borders, an overview of the norms for the ten largest cultural clusters in the world. But nothing better teaches you about how to effectively engage in chit-chat cross-culturally than watching how others do it.

Pay attention to what kinds of things people discuss. As always, beware of generalizing your observation from one or two encounters to an entire culture. But this is your best source of information on how to do chit-chat. Ironically, introverts may do this more naturally than extroverts because the introverted person is naturally wired to quietly take in what is going on around her.

4. Get some local news

Even brief mention of some relevant, timely information about a culture or city goes a long way to demonstrate interest and awareness of one's context. And it's usually a safe place to begin conversation because it's already been in the public eye.

Ask what an individual's perspective is on a particular situation. If the local sports team has just played in the world cup, or a national election is forthcoming, even some brief mention of it demonstrates you have some personal interest in your conversational partner's context.

Instead of starting with "What do you do?", try "Where are you from?" I know some people are going to challenge me on this and I get that. It's not a simple question for many people to answer, particularly if they've moved around a great deal or find themselves living in a place that doesn't very well reflect their true heritage.

But the point isn't so much the precise answer they give, but to see how they respond. Some might speak very literally about the neighborhood in which they live and grew up, while others might speak about the long-term heritage of their extended family.

Many of our regular readers are seasoned travelers and cross-cultural experts. Weigh in with your own conversational strategies!

So I'm biased. Now what?

The perils of talking too much