Why is gossip such a tough habit to quit? 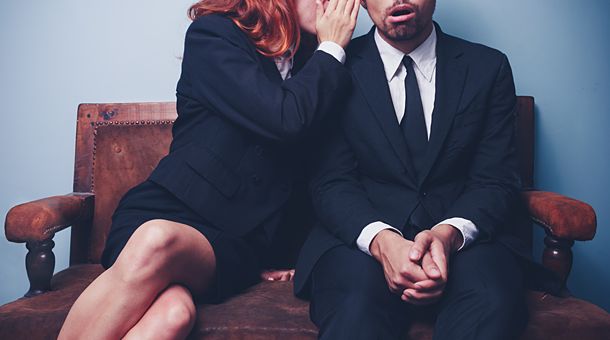 Over the years, I've come across hundreds of workplace situations where gossip was seen as "business as usual", part and parcel of the culture. And in many cases, the individuals involved would even claim to be "against" gossip.

Yet even after attending formal meetings to explore the "gossip issue", or after sensitivity training sessions intended to reduce the gossiping, or after organizational mandates that "no more gossiping will be tolerated" and even after individuals "signed the pledge" to speak openly and directly and to reduce the "gossip problem", even after all this, a fair number of people who had apparently committed to change the culture continued to engage in gossiping.

So what is it with gossip? Why is it such a tough habit to quit?

Consciously or unconsciously, most gossip is fear-based. So someone's commitment not to gossip can be subsumed by fear, anxiety or concern about who they might become if they stopped gossiping.

People who gossip often have a disproportionate need to be seen, acknowledge, liked, wanted or accepted. They need others to feel comfortable around them, and so acquiesce when drawn into gossip. Why?

Gossiping is a protective mechanism

Stopping yourself from talking about others can be very challenging, even painful. That's because many of us have great difficulty being open and authentic or acknowledging our vulnerability.

Gossiping acts as a defense mechanism that diverts attention away from us. By putting the focus on someone else, it means we don't have to disclose our own feelings or emotions or have to "open up" to others.

Gossiping then becomes a way of not having to reveal anything about ourselves. Most gossipers have lived life behind a mask, putting on false identities when they get dressed to face the world, always needing to protect themselves from showing their authenticity. They feel frightened and threatened.

SOME QUESTIONS FOR SELF-REFLECTION

The commitment to quit gossip is not simply a mental or intellectual choice. To behave authentically and sincerely requires an inner intention that emanates from a deep sense of integrity and real desire to do no harm in our lives.

Without this deep commitment, or if quitting gossip and doing no harm are perceived as policies or principles imposed from outside, gossipers often fall off the gossip wagon. Simply making a mental choice to quit gossip isn't enough. Like other addictions, it's not just a mind-over-matter equation. So, at the end of the day (and throughout the day), the commitment not to gossip often dissipates rather quickly.

It's an inside-out proposition

The need to please

Dealing with a space invader

Violence: when we lose touch with our soul

How do I deal with malicious gossip?

Time to silence the gossips

What to do about gossip