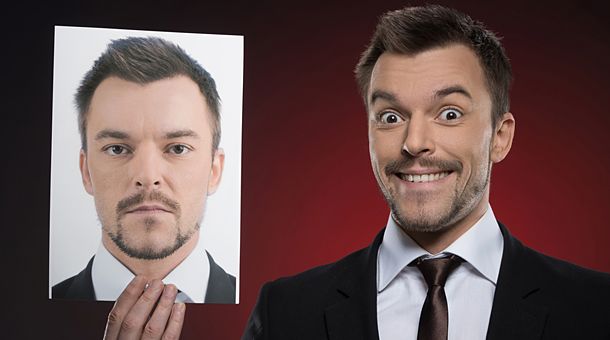 Most training is "show-and-tell" or "how to", methods that aren't particularly effective and require concentration and acute observation on the part of the learner. So this isn't the best way to go about improving your voice and presentation skills. In fact you would do much better by first discovering how to do the job badly, so that when you do it right you have a physical as well as a conceptual memory of the difference.

The way to go about this process is to make two lists containing things that have annoyed you when you've seen other people presenting - things that you know distracted attention from the crux of their message.

In the first, note down any awkward physical mannerisms they displayed, such as the constant checking of a wrist watch, jigging from foot to foot, fiddling with a tie or a piece of jewelry, clicking a pen, constantly looking down at a laptop or sideways and upwards at a screen behind them, laughing at their own jokes or being unsure or too sure of themselves. You'll recognize these when you see them!

The second list is about the problems relating to their voice. Maybe the speaker never looked to where their voice was expected to reach. Maybe their pronunciation was poor or their speech rhythms were too pronounced or not pronounced enough. Maybe the person spoke without any pitch changes or with too many. Perhaps they used too much jargon or parroted sentences from a screen that could be read and digested much faster than they could intelligibly be spoken. Enough! I am sure you will come up with many more speech habits that you find unhelpful.

The important thing for you to do next is to try out these same bad habits yourself so that your own voice and own body become familiar with how they feel. Do this seriously, as though you were in front of a real audience. Try it in large imagined spaces and small imagined spaces, be it round a boardroom table or in a large conference hall. Practice while sitting and standing and always have the disposition of your audience clearly in mind.

After you have simulated one of the habits you thought was distracting, immediately simulate one you would ideally put in its place. Make notes as you go and, if possible, mull over the whole process just before you go to sleep.

All the vocal things you think worked best can be practiced in the shower, in the car, in a park, or when cycling or walking to work. If anyone hears you they'll just assume you are on your phone!

Then try out your chosen bodily and vocal changes in front of people who will give you honest feedback. And perform in front of a mirror or video and give honest feed back to yourself.

Pronuntiatio - the fourth of the five canons of rhetoric set out by Latin scholars in 1BC - advised that anyone wishing to impart information clearly ought to learn some acting techniques. Two thousand years later, nothing much has changed.

It's a fact of life that even the most seasoned performers occasionally find distracting habits infiltrating their delivery. But if you have put your voice and body through poor practice as well as good practice, you are far less likely to succumb. This is because muscle memory as well as brainpower will automatically cut in and cause your heart rate to slow down and you to sigh out. As you breathe in, smile and continue, not one person in your audience will have the slightest inkling that those little devils of poor practice just tried to scupper your performance.

What gets in the way?

Day-dream your way to a better presentation

Help me overcome my presentation nerves

The act of presentation