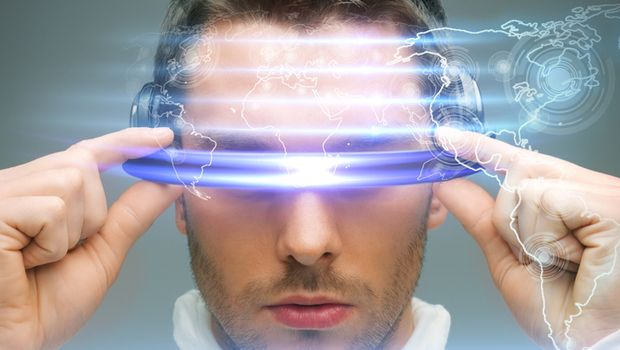 Two decades ago virtual reality was the next frontier. In fact, in the pre-Dot Com days of the early 1990s, many technologists were confidently predicting that most people would soon be spending their days in computer-generated worlds that would be accessed by donning a virtual reality helmet.

While mainstream virtual reality (VR) may have gone the way of the dodo, its half-cousin of augmented reality (AR) is starting to attract significant interest, thanks in part to the hype around Google Glass. In contrast to VR, AR overlays digital data on its user's vision of the real world. People are therefore free to interact with 'reality' and the digital realm simultaneously, with a visual link being established between the online and offline worlds.

Most early forms of mainstream AR were smartphone or tablet applications including Layar, Junaio and the Wikitude World Browser. All of these apps are still available, and can overlay information on a real-time view of the real world as seen through a smartphone or tablet's camera. Utilizing the device's GPS location and orientation, this makes it possible to hold up a phone or tablet and to locate restaurants, properties for sale, post boxes, Tesco stores, available hotel rooms, local Twitter users, or even single people looking for dates! Alternatively, a logo, barcode or QR code can be scanned and relevant information located online and overlaid.

While handheld AR is all well and good, it is not terribly convenient or even always safe to hold a computing device in front of your face. Because of this, many next-generation AR systems will make use of dedicated heads-up displays. Most notably, Google has developed Google Glass. This is a cross between a lightweight headband and a pair of spectacles, and positions a tiny, refractive projection display in front of one eye. For those who wear spectacles, prescription Google Glass hardware is in the pipeline.

In addition to its tiny projection display, Google Glass has an integrated camera and wireless Internet connectivity. There is also a bone-conductive speaker in the part of the hardware that rests behind the ear alongside the battery.

When wearing Google Glass a user can see perfectly normally through both eyes. But via a tilt of the head, a swipe on the side of the display, or a spoken command, an overlaid computer image can be conjured into view. The result is a glowing, colour display that floats in space, and which is supposed to be visually equivalent to a 25 inch screen viewed from eight feet away. On this display all manner of content can be called up, including e-mails, information on the weather, travel directions, or the results of a voice-initiated Google search. There's also language translation functionality and the ability to take photos or record video.

Already Glass is not the only AR headset, with competitors including the Ora from Optinvent, and the Wrap 1200AR glasses from Vuzix. The latter are more like a 'traditional' virtual reality headset, with an LCD screen positioned in front of each eye and stereo cameras to capture 3D video of the real world. In time we may even see AR contact lenses. So far, a team led by Babak Parviz at the University of Washington has developed a contact lens with a crude display that is fed data and power wirelessly. Such future AR hardware could even allow us to access digital content with our eyes closed, and perhaps even when we are asleep!

While it may be novel to be able to read social media content without holding up a traditional computing device, the business application of AR remains in its infancy and is ripe for innovation. Not least, for surgeons, mechanics and others who perform complex tasks with their hands, the opportunity to see digital information overlaid on their real-world vision could prove invaluable. In Germany, BWM has already developed a concept for an AR system that can help a mechanic disassemble and reassemble a car. Meanwhile, in their 'digital accelerator lab', Philips have demonstrated how Google Glass headsets can be linked to their Intellivue patient monitoring technology in order to provide surgeons with real-time readouts during an operation.

Taking an entirely different approach, others companies have integrated AR hardware into the real world. Perhaps most notably, Lego has developed an AR 'mirror' that is now in use in some of its stores. Potential customers take a box of Lego up to the device, where they see a reflection of themselves and the box in their hand. An AR, animated overlay of the model that can be made from the contents is then superimposed on the top of the box, and can be inspected from any angle just by rotating the packaging. In New York, Bloomingdale's has developed a similar AR window that lets passersby try on sunglasses, and has also trialed other fashion applications.

Ultimately, the extent to which AR matters for business will depend on how keen the general populace are to further embrace the digital world. Back in 1995 when I published the book 'Cyber Business', many people told me that hardly anybody would ever want to carry a mobile phone, let alone socialize online. And yet these are both now incredibly mainstream behaviours.

In a decade or so, there must therefore be at least a possibility that many people will regularly wear AR headsets or contact lenses that will provide them with a continuous stream of overlaid digital information. And if this does prove to be the case, almost all companies will have to get themselves and their products as visible and accessible in AR as possible. Just as today no company can avoid having a website, so in ten years time an AR presence may be a prerequisite for business success.

Christopher Barnatt is a futurist, author, videographer and Associate Professor of Computing & Future Studies at Nottingham University Business School. His latest book, "Seven Ways to Fix the World" was published in Sept 2012.