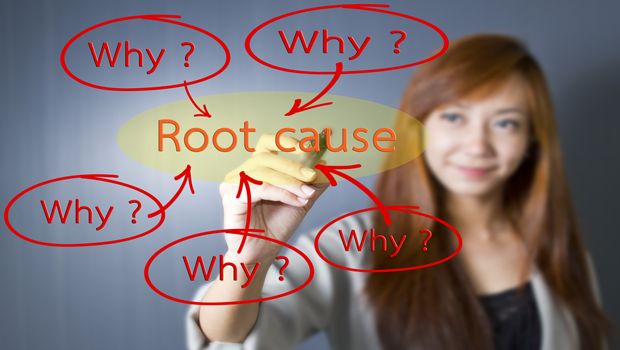 Image from Shutterstock.com
Oct 26 2016 by Peter Vajda Print This Article

For many years, the Japanese have approached the process of problem- solving with a strategy known as "the Five Whys". In its simplest form, many Japanese managers will ask themselves "why?" five times when they're confronted with a problem. Why? By the time the fifth "why?" is answered, they believe they will have found the ultimate cause of the problem. Asking "why" repeatedly directs one's focus toward root-causes, enabling problems to be solved and solutions to be found in a long-term, sustainable way.

In many Western organizations, thanks to the work of Peter Senge and others who have brought systems thinking into the corporate arena, the "Five Why" problem-solving strategy has gained ever-increasing popularity, and credibility.

In many situations, in your immediate position or in your organization, for example, real root causes become obscured by other, "apparent" problems. Thus the goal of the "Five Why" exercise is to ensure that root causes, not merely these superficial symptoms, are identified and resolved. That's what makes the strategy so useful for identify the root of a problem, issue or conflict, be it at work, at home or even in relationships.

How does it work?

After identifying a recurring problem, the roots are identified by asking "why?" five times. By doing so, you identify systemic relationships - connections and relationships between and among problems or issues.

The process can take from five minutes to five days depending on the depth of the problem and the process.

So, here's an example, taken from Peter Senge's, The Fifth Discipline Fieldbook. The exercise can be done in groups of any size.

1. Identify individual issues or problems your unit, department, organization or entity (family, relationship...) is facing. Ask, for example, "what problem do we have to solve in the near future?" You can display these problems on cards, on a white board, a screen, etc.

2. Arrange similar problems with one another and eliminate duplicate descriptions. List these problems with short explanations; but without discussion.

For example, suppose a marketing department is undertaking this process and they come up with the following ranked problems. The number in parentheses equals total number of votes each problem received.

Now, focusing on the highest-ranked problem, ask the first "why?" That is, "why do we have increased customer complaints about our new product?"

Record or display all responses, and for every response ask, "why?"

Now you have moved to the first level of answers.

Then, start with one of the answers. For example, "Because of the frequent level of breakdowns."

For every answer, ask another "why?" For example, "why do frequent breakdowns occur?"

The repeat the whole process until you have covered five levels of "why?".

Depending on time, you can focus on one answer; however, to honestly identify root causes and systemic cause-effect relationships, you should go into as much detail as possible and you should focus on every answer. In fact, you may discover that varied problems have a common cause and answers will begin to converge on the common cause.

For a different example, let's take a medical practice. After having uncovered the highest-ranked problem, "the patient is receiving incorrect medication.", you begin a Five-Why process.

Q. Whyis the patient receiving the incorrect medicine? A. Because the prescription is wrong.

Q. Whyis the prescription wrong? A. Because the doctor made the wrong decision.

Q. Whydid the doctor make the wrong decision? A. Because she did not have the complete information in the patient's chart.

Q. Whywasn't the patient's chart complete? A. Because the doctor's assistant omitted a lab report.

Q. Why hadn't the doctor's assistant entered the latest lab report? A. Because the lab technician phoned the result to the receptionist who forgot to tell the assistant.

This solution also highlights that the core of many problems tends to be a failure of process, not the fault of an individual. So always bear in mind that "people do not fail, processes do".

The Five Why strategy is useful for challenging - in a positive way - statements or answers to questions. It can be also used to ensure that you have thought through the answer as well as the validate whether your answer actually answers the question. Often, a statement that does not fit the question is due to misunderstanding the meaning of the question.

Granted, it's a method that tends to drive some of us a bit crazy, but when used in the proper circumstance, it is very effective and encourages mutual understanding.

In systems thinking and Five Why problem solving efforts, you simply need to select one problem. It doesn't matter where you start; during the process, you will be able to identify a link that represents influence on another problem or issue.

These connections don't exist in isolation. There is always a "cause-effect," relationship - influenced by some variables, and influencing others. Sooner or later, through the Five Why process, a pattern of relationship among the problems will emerge. Then deeper and systemic issues also come to the fore. Figuring out how variables link takes some practice, but it is worth the effort.

From adversary to teammate

If you want to succeed, get used to failure

Management thinking is not all about problems