VUCA, Dao and learning from China

Fifteen years ago, the US Army War College held heated debates on how to best define the new world order. The answer given to America's future generals was that we live in a "VUCA" world. This acronym also describes particularly well the current business environment – which is Volatile, Uncertain, Complex and Ambiguous – and which is destabilizing many of the carefully-worked strategies designed in the boardrooms of Western companies.

But surprisingly, Chinese entrepreneurs do not seem unsettled by this VUCA world. Why? Because they grew up in a VUCA environment and powered the business experiment initiated by Deng Xiaoping in 1978. Modern capitalist China was born at the dawn of the VUCA age. Which begs the question, what can Western leaders learn from the emerging Chinese management style?

Luck, Movement and The Dao

Whereas Western managers try to minimize the role of luck in their business approach, Chinese managers are stoic and opportunistic. They believe things are always transforming into their opposites (e.g., failure into success, disadvantage into advantage) and perceive change as a constant instead of a transient process.

In this context, the Chinese management style has developed as both dynamic and agile.

Dynamic, as Chinese managers alternate between periods of frenetic activity and aggressive patience, guided along by a fuzzy vision instead of clear milestones. Agile, as they adapt to the cycles, based for instance on government orientations, and act tactically, deciding the company's next steps on the basis of latest developments.

While Chinese managers adhere to a vision, they insist on strengthening their alertness in order to move quickly as they juggle several opportunities simultaneously, instead of being committed to one strict strategy.

Disturbed by the violence raging in the sixth century BC and by a perceived lack of a moral compass, the philosopher Confucius prescribed principles for the good ordering of society. The most important was li, which means the rituals for ethical and morally correct behavior. The concept of li stands at the core of Chinese society and has influenced Chinese management style to develop hierarchy and consensus.

Hierarchy is essential to maintaining stability. The concept of li insists on the group - whether a family, an organization or the public at large - and provides no license for "ego-tripping" and self-advancement. In a turbulent and unpredictable environment, this sense of internal order is key to nurturing and maintaining organizational capabilities.

But far from relying on pure authority, Chinese management style is also consensual at two levels. First, a leader's influence and power conferred by the hierarchy are only conditional, following the Confucian precept that, "If rulers misbehave or abuse their power the people have a right to oppose and, if necessary, depose them" (the "mandate of heaven"). This power must thus be used with great care and due consideration to the views of other group members because it is the group that eventually acts. The management style is also consensual as, although the boss makes the decisions, he or she will only do so after lengthy discussions with advisers and representatives. 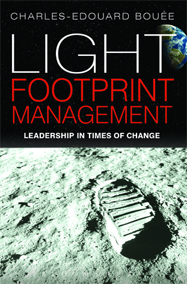 What does China's 'management revolution' tell us about our turbulent world and what can Western companies learn from it? And just what is "Gemba power...?" [More]

To conclude, the Chinese management style has developed into something complex and natural. It is a bridge between the rational and the emotional, the tangible and the intangible, the material and the spiritual. It is subtle, sensitive to cycles and seasons, and fuzzy, difficult to master. It is also natural in the sense that it emerges from the VUCA environment but remains deeply rooted in Chinese culture.

It should not come as a surprise, for example, when Chinese CEOs present annual results in traditional robes, discoursing on their philosophical and spiritual views or teaching tai chi, jinyu ("keeping silent") or jingzuo ("meditation") to their top executives.

While the Chinese management style is not a perfect adaptation to our turbulent and complex world, it remains brimming with insights and several of its precepts may prove valuable to enrich Western practices.

Charles-Edouard Bouée is President of Roland Berger Strategy Consultants, Asia, and a member of the Global Executive Committee. Bouée has been working globally on strategy, mergers and large-scale performance improvement projects. He is the author of Light Footprint Management (July 2013) published by Bloomsbury.

Long, slow finance and the price of fish

Why do Chinese businessmen insist on getting you drunk?

Made in China: smarter companies?

China and the world of tomorrow

Can China's maintain its competitive advantage?