The death of economics?

On the 12th of November 2012, executives from Starbucks, Google and Facebook were called to the UK parliament's Public Accounts Select Committee. The charge was that their companies were avoiding paying over £900m in tax. Google UK's chief executive complained that his company was not doing anything 'illegal'. But as committee chair Margaret Hodge countered, the issue was one of morality, not legality.

The above provides a recent example of how economics-only thinking has come to dominate far too many of our key decision making processes. There is little doubt that Starbucks et al are in compliance with UK tax law. Yet by directing funds around the world to achieve tax avoidance (and so maximize their profits), they are certainly not behaving as good corporate citizens of the UK. For these companies, the only thing that matters is the economic bottom line. And increasingly that is simply not good enough.

In calling for the 'death of economics' I am not suggesting that economics no longer matters, as for all individuals and businesses on a basic financial level it certainly does. Some level of profit needs to be made to keep a business solvent, while individuals over time do need to balance their budgets. However, what I am suggesting that is that we need to stop relying quite so heavily on traditional economic logic as the primary decision making mechanism of human civilization.

Economics-first thinking is increasingly failing us for a variety of reasons. Not least it is incapable of dealing with the challenges of climate change and environmental sustainability. By vesting our faith in the world's dominant religion of economics we have come to place the welfare of the economy above the survival of the biosphere that keeps us alive. And this is nothing short of suicidal.

According to a 2011 UN report, if we do not change our ways then by 2050 humanity's demand for natural resources will rise threefold to 140 billion tonnes a year. Unfortunately, such materials will simply not be available. And even if they were, their consumption would accelerate global warming to very dangerous levels. Worse, several decades before 2050, most oil wells will have run dry, two thirds of the world's population will not have enough water, and there will be rampant food shortages.

Since the early 1970s, scientific studies like 'The Limits to Growth' have been predicting that if we do not transition from profit-first consumerism, then somewhere between 2020 and 2030 our civilization will begin to seriously falter. This is clearly a very serious matter indeed. And yet economists, and their worshipers in the mainstream media, continue to obsess about decimal-place measures of GDP. When, after all, did you last see a TV news report that questioned the sanity of constant economic growth?

Like it or not, constant economic growth can now only be achieved by further bankrupting tomorrow and stealing quality of life from future generations. In pursuit of GDP rises, economists may continue to preach the need for further globalization. And yet in the face of future oil shortages and climate change, a return to the local production of basic goods will prove the only remotely sustainable solution. Today in developed nations, every calorie we eat consumes 10 calories of petroleum. If we are to feed ourselves in a few decades time, we therefore need to return to a state of local self-sufficiency in food and other basic goods. And yet economics-first-thinking is still pushing us in precisely the opposite direction.

SEVEN WAYS TO FIX THE WORLD 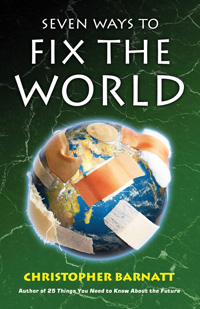 Fortunately, there are signs that the folly of economics is starting to be seriously questioned. In 2012 the Occupy Movement garnered support right around the world. Indeed, since the financial collapse of 2008, more and more people are recognising that how we currently live is environmentally and morally unsustainable.

Somehow we need to return to a world in which we consume things less and value things more, and in which economies serve their citizens and not the other way around. Achieving this will of course not be easy. But as transition initiatives, local resource exchanges, crowdsourcing ventures, urban agriculture and a myriad of other grass roots, community undertakings continue to blossom, there are clear signs that economics is going to be put firmly back in its place.

Already some smart businesses - both large and small - are starting to get this. And the rest somehow need to recognise that economics is not all that good business is about - and fast.

Christopher Barnatt is a futurist, author, videographer and Associate Professor of Computing & Future Studies at Nottingham University Business School. His latest book, "Seven Ways to Fix the World" was published in Sept 2012.

To me the problem is not too much economics, but rather bad economics. Traditional economic theory, left-wing or right-wing, assumes that the economy consists of money, assets, outputs etc that obey 'laws'. In the real world, it doesn't - which is why conventional economics & associated business models generally fail. The real economy consists of people, making economic decisions. So the new term 'behavioural economics' is really tautological. There is no other kind. 'Old' economics has to be completely replaced with the behavioural kind, allied to values of sustainability, ethical conduct.

Great perspective, Chris; thanks for making me think. I guess I'm a walking dichotomy. Although I tout the economic principle of 'what you tax you get less of and what you subsidize you get more of,' I'm also a huge fan of Limits to Growth and Thinking in Systems: A Primer (Meadows, Meadows, and Randers, and Meadows). Your statement about consuming things less and valuing things more is a life lesson we could all practice in this toss-away, fast-food mentality world. But oh, where to begin? Luckily I'm also a fan of The Structure of Scientific Revolutions (Kuhn), so maybe there's a way out of this spiral after all.

The assumptions behind the economic system that powers most of business are seriously outdated. These include the notion that resources are unlimited, that people are replaceable and that they also need to be told what to do. Fortunately the idea of profit driven companies is being replaced by companies who create value. Inherent in that is that these same companies are financially secure, don't run to the government for bailout and all embed and manage by life-affirming values. They do, what Jay Bragdon calls, mimic Nature.

Economics won't die but our monetary system might unless it uses the same principles Nature does to establish resiliency: diversity and interconnectivity. Bernard Lietaer's work documents how to stabilize the monetary system by following these principles. We can't fight the old system but we can with create ease create a new one to take its place. Small and medium sized businesses have a lot of power to do so as does big business that thinks and makes their decisions/ acts using Nature's principles.

The biggest problem with economics is that it has forgotten it is a social science. People have been totally discounted from the process, as politicians try to use economic numbers to rationalise what they do or do not do in dealing with the economy. Only when economics remembers that it involves people will it perhaps provide useful information as to the current state of the country. Until then, though, people will find themselves subservient to the corporation and the numbers.