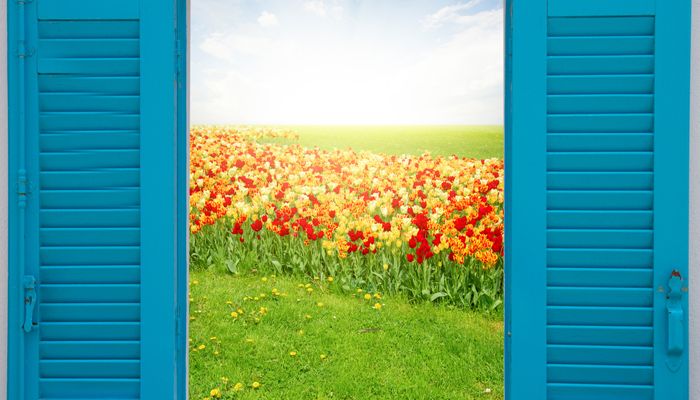 Flowers through an open window from Shutterstock.com
Apr 20 2015 by Max McKeown Print This Article

There's nothing much wrong with a boom. Or even a bubble. But after every boom comes a bust. People tend to understand that economic booms and bubbles come from excessive optimism. Yet the problem isn't the excessive optimism itself.

The real problem is what happens after a boom. When the bubble bursts, optimism is replaced by pessimism. Optimistic voices are replaced by pessimistic voices. All the people who are afraid of everything get very loud. They write books about how they always said that the banks would collapse. They appear on chat shows boasting about how cleverly they predicted the economic slowdown. But they have no answers. They can offer no better future.

The trouble is that when we most need optimism, these prophets of pessimism offer only fear, uncertainty and doubt. When we most need confidence in the future, we have happiness leeches sucking us dry of hope. We get taken over by the fear.

The more we believe that it is worthwhile exchanging our hard work for the hard work of others, the more the economy (our creation of value) grows. We happen to use money as a convenient way of swapping. But that doesn't mean that money is real. It is the effort that is real. It is the effort that needs to be encouraged. And that effort requires trust in each other. Making an effort requires confidence in the future. It thrives on certainty. It needs belief.

Naturally fearful people are looking for signs that the world is ending. Every new bit of negative news confirms the worst. Every bit of positive news is discarded. It's a kind of phobia. It is irrational and damaging. They are like the hare (in the Buddhist story) disturbed by a falling fruit who believes the earth is coming to an end. Or like Chicken-Licken who believes the sky is falling when an acorn lands on her head.

In those stories, the panic spreads. The fear is contagious. Rational thinking is abandoned. And there are different endings. In one, a calm lion restores calm by investigating the cause of the panic. In another, the animals are so afraid that they trust a fox who offers them safety and are eaten. The risk at the moment is that fear will cause panic, riots, and senseless actions that will cause real damage.

The world works best when everyone is doing something useful and satisfying. Unfortunately, believing that the big, bad debt is real will reduce the number of people doing something useful and satisfying. Believing that the world is coming to an end will lead the world to a slowdown. A recession may be an unavoidable correction to over exuberance but a depression, or a 'choppy recovery' is avoidable.

That's because a depression is the result of giving pessimists too much power. If you want growth, you need to lead people out of excessive uncertainty. If you don't know how, then find an optimist who does.

These pessimists may believe they are doing the right thing. But they may lead us down to an economic hell with their good intentions. The debt is not real. The threat of the is not real. But the fear of debt is a problem. And the impact of that fear is potentially frightening.

Fear makes bad decisions. It stops people working. It stops people sharing resources. It stops people getting an education. Or building a school. Or working together. Fear encourages short-termism, protectionism, fundamentalism, hostility towards anyone else who might steal your job or spend your money. People hide.

Fear, uncertainty, and doubt have a history in sales, marketing, advertising and politics. They have even been given their own acronym - FUD. It was a phrase coined in the 1970s to describe a tactic of rhetoric that influences public opinion by undermining confidence. In business, if the market leader can create uncertainty around a new competitor then the customer is more likely to stay with what they know than take a risk. In other words, FUD encourages inaction.

Some of the FUD seems useful to those in power because appears to make the population easier to control. Some of it is created by people who really do believe that the world is coming to an end.

This culture of fear is packaged up and powerfully presented. Even during boom periods, discussion boards dedicated to the possibilities for global economic meltdown keep thriving. They sell the fear. And if too many people buy the fear we will have a more serious real world problem. People not working. People not creating.

Exciting work is key to engagement

Thanks Max, for naming fear in such bald terms. It has been successfully used to manipulate employee and consumer behavior since the days of FUD. (A new acronym!) What I find most interesting from a personal/professional development point of view is that most people and companies have no idea when they are gripped in fear, much less how to use it to evolve. Yet, watch any movie based on the Heros Journey framework (thank you Joseph Campbell) and we see exactly how fear is used to become more whole. Your post triggered a couple of others thoughts for me: 1) Uncertainty is the current condition we operate in. Bracket it between fear and doubt (another form of fear) and inaction results. Use the uncertainty to deepen trust in the adaptive creative talent we all have, and innovation explodes. Our dominant preference is to focus on the negative so we wind up taking ourselves out at the knees while blaming external conditions. Opportunity #1: Use uncertainty. 2) The whole pendulum swing from pessimism to optimism seems to skip the middle bit which is to stand in the eye of the storm and observe, then seize the opportunities surrounding us. The duality of either/or obfuscates the opportunity to be aware of what emotion is driving action or inaction. Opportunity #2: Increase capacity for regulating emotions personally and organizationally. (Organizations/sectors seized by fear tend to run to the government for their allowance when they fail to use foresight or insight. 3) Biologically, knowing the distinction between fear-based actions (protection) and trust/optimism (growth) based is imperative. Cellularly, personally and organizationally we just can't be in two places at once. Opportunity #3: Notice when fear has hijacked all rational and sound decision making through leaders present enough to call for calm reflection. This capacity resides in a leader who has a higher level of consciousness (or is working on it) and who has developed sufficient mastery and self-knowledge to know when there are far too many people running around with their hair on fire. I think we are at a very exciting juncture in our capacity to rise above limitations or apparent barriers. Question is: Will we seize the moment or passively watch it float on by resigned to being victims of a fate we constructed through unconscious thinking?

Hi Max - We suffer from pro-cyclical rhetoric: too much doubt and fear now, just as there was too much irrational exuberance during the boom. Commentators talk far too much about money and far too little about real businesses and real people. If businesses are sufficiently creative, we can trade our way through - and there are fantastic opportunities in the globalised trading world, with the exciting rise of new economies (like Vietnam and Chile as well as India, China etc). My only point of disagreement is that the I'm afraid the debt IS real. In the west we are living way beyond our means and have to reduce our deficits. As and when China wants to let its currency appreciate and/or worry about getting the money back that it's lent us, we'll find it hard to borrow and hard to repay what we owe. Galbraith in the Washington Post is hopelessly complacent: so what if US bonds have a v low interest rate at the moment? So did Greece's 12 months ago! A little bit of fear about debt would be good; but you're right that optimism about trade and innovation is the real way out.

Get ready for the unexpected