If you want to succeed, get used to failure 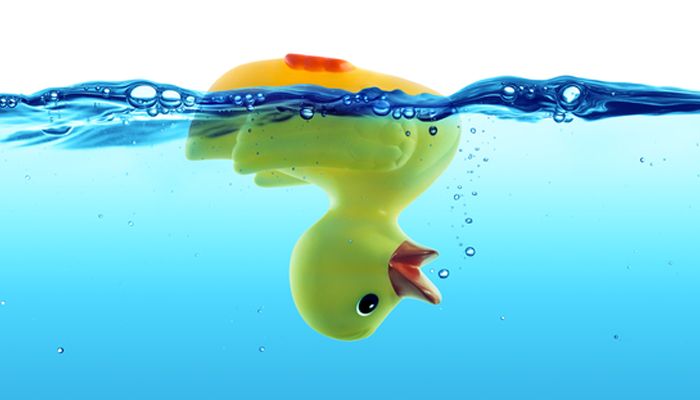 Water off a duck's back from Shutterstock.com
Aug 06 2015 by Max McKeown Print This Article

The 'too big to fail' argument exposes the problems that come when learning from experimentation is made less likely because it seems too expensive or too frightening or too difficult to let something old die and be replaced by something new. Ensuring that what doesn't work can be improved, changed, or replaced is a vital part of the ability of a system (or a person) to improve. Who hasn't felt trapped by success? Or by the responsibility to succeed?

In the Netherlands, when a man who had flown for thirteen years with a fake pilot's licence was arrested he announced loudly that he was relieved to finally be able to tell the truth. In the UK Ministry of Defence, auditors found projects valued at billions of pounds that were incomplete but still funded because no-one was prepared to admit that they have failed - the projects just stayed on the books to avoid anyone having to tell the truth.

Many senior management teams are plagued by years, even decades, of damaging defensiveness that avoids talking openly about what works and what doesn't - and so they never learn lessons or find solutions.

Failure of individual products or projects is not always bad thing for a company. The problem comes with particular kinds of failure. If the project or product continues long after most people knew it was doomed. If you don't treat failure as an experiment then you will waste valuable lessons. If you find failure built into company DNA, you can't get rid of faulty thinking.

Alessi, an Italian manufacturing company, described as one of the most important factories of Italian design, celebrates failure. It has its own 'Museum of Failure' and a coffee table book full of prototypes that didn't work. It wants to work at the border between what is possible and not possible. One step too far towards impossible and customers won't understand it. One step too far towards possible and everyone can produce it.

Delivering products that customers love but cannot get anywhere else relies on working at the border. And risking failure.

Learning: Acknowledging the role of failure allows you to look for lessons from other people's experiments rather than writing them off as worthless. The first successful vacuum cleaner, rubber tyre, light bulb, computer, mobile phone and automobile - all started as failures. Then someone grabbed the lessons from past attempts and succeeded.

Making mistakes can be the quickest way of learning. You can find out what doesn't work and can avoid wasting time. You can deliberately do what seems unlikely to work. You may discover a non-obvious way of doing something that sits on the high profit border. You may gain a greater understanding of what is possible and impossible (and how to move between the two) that guides future efforts.

Coping: No one likes to fail but understanding what failure is and what it means can help. The disappointment of failing still hurts but it doesn't hit so hard that you can't work effectively for weeks or months. Knowing that failing isn't the end allows you to recover quickly and get back in the game. People also find it easier to admit problems.

At Genentech, the pharmaceuticals firm, leaders receive incentives to flag up failing projects. Better to compensate people than to let them carry along as long term drains on cash and resources.

Viewing failure differently depends on company culture. People in low self-esteem cultures conclude there is something wrong with them. They hide from the problem. They seek sympathy not solutions. High self-esteem allows people to take a problem-solving approach to failure. They assume there is a solution and that they are capable of finding it. Worst is a climate of fear, which can lead normally honest people to crazy lies and aggression to avoid (often frenzied or political) criticism.

Warning: Past success does not guarantee future success. People tend to praise you for present results that have come about because of good decisions in the past. Unfortunately, at the very moment you are enjoying your best results you may be making the decisions that will lead your company to extinction.

Believing the praise makes it more likely that you will make the wrong decisions. It encourages unfounded belief that the decisions of the past provide a guide to the future. Be careful about any customer research that reveals universal satisfaction or any management reports that conclude that all is well - only faults, dissatisfaction, and problems give you anything to improve.

When Google floated on the stock market, it made this clear to investors: "We will fund projects that have a 10% chance of earning a billion dollars…Do not be surprised if we place smaller bets in areas that seem very speculative or even strange."

So far, they have placed bets on thousands of ideas including YouTube, a multi-million dollar competition for the first private journey to the moon and a massive investment in Calico, which ains to find cures for “age-related diseases”. Some will fail, many more will fail, and then some precious ideas will succeed.

Some of the lessons are clear - to achieve anything worthwhile, and particularly anything new, will involve cock-ups, mistakes, accidents, mishaps, misjudgements, flops, missteps, false steps, disappointment, and - sometimes - criticism and insults. Doubters and cynics will disapprove until you succeed. Haters will disapprove whether you succeed or fail.

Success is often proportionate to the number of intelligent experiments you are willing to try. Even dumb questions can make you smarter because you exchange what your superficial reputation for deep knowledge. The story of every innovation begins with a series of aberrations. So that if you want to succeed you will have to get used to (coping and learning from) failure.

The power of proactive thinking

The truth about failure

The truth about failure

The price of failure?