Believe, and help others see why they should, too 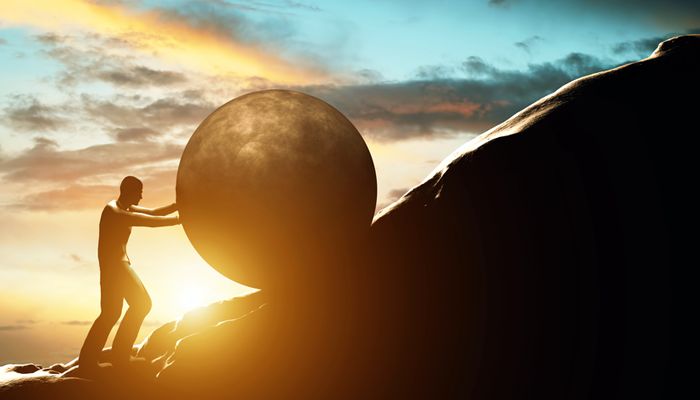 Rolling a giant ball up a hill from Shutterstock.com
Nov 18 2015 by Dan Bobinski Print This Article

The power of belief is foundational to success. People who look at a challenge and say "I can't" have already determined their outcome without even an ounce of effort. Team leaders should take note of that, because their words have a tremendous influence on the success of their teams.

As an example of this, a while back I was conducting team-building training with sixteen senior managers. The task at hand was a rather difficult "low ropes" activity that, when first presented, appears impossible. Yet on this one occasion, after stating the objective of the exercise I said, "It may appear impossible, but every other group I've asked to do this has accomplished the goal, so I know you can, too."

During the post-activity discussion the power of belief was made very real through a comment from one of the participants. I had asked, "When I first presented the task to you, how many thought it was impossible?"

Usually when I ask that question, at least half the participants raise their hands. But this time, only one person indicated she thought it was impossible. Everyone else thought it was doable. Then one participant proclaimed "You said we could do it, and we believed you."

The power of belief

The power of belief enables people to do things far beyond what is considered normal. A few years ago I heard about a small boy whose favorite book was The Little Engine That Could. The boy loved the book so much he had his parents read it to him several times a day.

One day when the boy's mother was driving him someplace, she was forced off the road and they plowed down into a canyon. Witnesses to the incident climbed down the hill as fast as they could, and feared the worst when they saw a burning car.

But when they got closer they found a little boy - who weighed half his mother's weight - pulling her unconscious body away from the flaming wreckage saying "I think I can, I think I can."

Belief is one of the most powerful tools a leader can possess.

Be aware of the horizon

I hope we can agree that effective managers and leaders know what they believe and why they believe it. They're in tune with the horizon - the future possibilities - by raising their sights and make decisions after considering what's ahead.

A small number of people can do this instinctively, but most of us need time for thinking and planning. However, because planning is not an "urgent" activity, many urgency-driven managers and leaders skip this activity.

Communicate your confidence in others

To build effective, passion-driven teams, managers and leaders must not only have confidence in themselves and where they're going, they must believe in the abilities of their people, too - and find ways to communicate it. In other words, while it's important to be confident, it's even more important to engage team members by communicating your belief in their abilities.

When team leaders devote time for thinking about the future and plan accordingly, they gain confidence in the team's vision. Separately, when they communicate their confidence in others, it's like putting fuel in their team members' gas tanks. But to enjoin people to the vision, a third skill is necessary, and it, too, requires time to do it right.

For team members to fully engage with their own deep levels of passion, each must see how his/her own motivations tie in to the big picture. This means team leaders must also invest the time to understand the motivations of each person and help each one connect to the team's direction.

Are you one of those team leaders who believes everyone should engage because you say they should? Do you expect people to fully engage because of the reasons you give them?

If so, might I suggest you break that mold and start thinking differently? Yes, knowing what you believe and why you believe it is a very powerful force, and a necessary ingredient for creating passion-driven teams. But people aren't going to give their all until they see their own reasons for doing so. As a team leader, it's your responsibility to help people find that connection.

I recently worked with an organization that had a highly-confident senior manager telling everyone the right things to do and encouraging everyone to connect, but he was giving his own reasons for why they should be doing so.

The result? Very few people were giving 100 percent. Most were doing only enough to get by. Thankfully, many junior managers got the message and started helping their team members see their own reasons to connect.

Connect it all together

Bottom line: If your beliefs are strong you have a powerful thing. The presence of a "can-do" attitude is a prerequisite for creating passion-driven teams. Team leaders must have it, and must instill it in each team member.

But for team members to fully engage, team leaders must be crystal-clear about the vision for the team, and take the time to help each team member discover his or her own reasons for engaging with that vision.

If you say you "can't" or "won't" do this, you've already determined your outcome. But personally, I believe you can do it.

The psychological contract during the downturn

Act locally, think globally! 35 days till kickoff: Pass It Forward Movement www.aunitedworld.org www.itsallwhoyouknow.org www.globalunitycalendar.org In 34 days from now, starting September 11, 2009 the new question at a party will not be 'What do you do for a living?' the new question will be 'So what are you doing to make the world a better place?' or 'What is your PIF program?' in this area we all start out equal! I welcome your comments.

Encouraging others to do what you want

10 beliefs that hold you back

Believing in yourself: the key to effective public speaking

Beliefs that hold you back