Engage me or enrage me 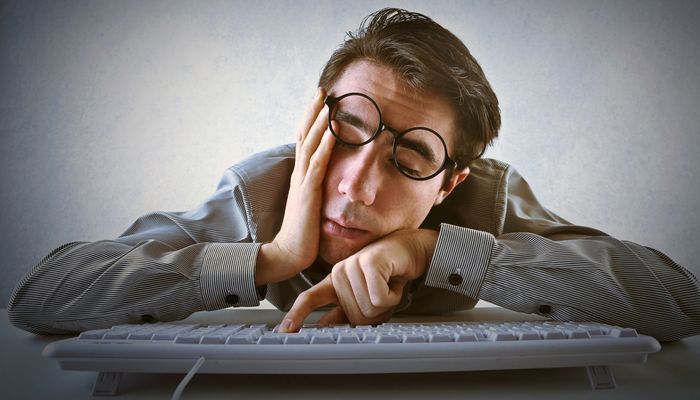 Sleeping on the job via Shutterstock.com
Sep 26 2006 by Max McKeown Print This Article

According to Marc Prensky, ex-teacher and actual-entrepreneur, there are three kinds of students, those who are: (1) Self-motivated, (2) Going-Through-The-Motions, and (3) Tuned-Out.

He claims, somewhat optimistically, that the US school system does a reasonable job with the first two but is struggling to deal with the growing majority in the third group who, "are convinced that school is totally devoid of interest and totally irrelevant to their life.

"In fact," he continues, "they find school much less interesting than the myriad devices they carry in their pockets and backpacks. These kids are used to having anyone who asks for their attention - their musicians, their movie makers, their TV stars, their game designers - work really hard to earn it. When what is being offered isn't engaging, these students truly resent their time being wasted".

That's pretty rational. Compared to stuff in their life that is truly engaging school is so boring and second-rate that they, "just can't stand it", and so turn off as completely as they are able to avoid blowing up with frustration.

The best selling games promise the Y and Z generations that they can be heroes in massive multi-player game (one has nearly one million users), fly on a broomstick, or save the whole of civilization - and they need to deliver on these promises or risk not being bought.

At school, Prensky points out; students must cope without a "don't buy" option. They are forced to submit to what is "for the most part, stale, bland, and almost entirely stuff from the past". It is "yesterday's education", with no mention of genomics, bioethics, nanotech - and no Jamie Oliver in the kitchen.

Students are enraged we are not doing better by them

Prensky concludes: "students certainly don't have short attention spans for their games, movies, music, or internet surfing. More and more they just don't tolerate the old ways – and they are enraged we are not doing better by them".

According to Max Mckeown, ex-employee, those three kinds of children grow up to become at least three kinds of employees. Those who are: (1) Self-Motivated (2) Going-Through-The-Motions, and (3) Tuned-Out.

The claim is strengthened by evidence such as employee research that found 30 per cent of us couldn't care less about our company achieving its objectives and 50 per cent are just bored.

The UK government's 'Workforce Boredom Index" found that admin jobs get an average boredom rating of 10 out of 10, followed by manufacturing 8, sales 7.8, marketing 7.7, human resources 6.6, more boring than accounting 6.3, travel 5.3, healthcare, 5.1, and ironically that the least boring of all - teaching – with only a 4 out of 10 boring rating.

Teachers found that, "never having two days the same", and the, "challenge" kept them engaged - while for students every day is the same and the challenge is living with the idea that one day the world of work will be even less fulfilling.

It's almost suicidal the thought that one day the repetitive, nonsensical, never-ending, series of absurdist beckettesque sketches of mass education will become, "the best days of their lives".

More managers and leaders ask me "how to engage" and "how to innovate" than any other questions. And of course these are two sides of the same question - because innovation engages and engagement innovates. The reverse is also true: indifference kills innovation and that the inability to innovate (or simply do something better) creates indifference. And it is this indifference (or unwillingness to get serially slapped) that clogs corporate arteries.

A great film, book, game, home, car, or piece of software is intelligently designed to enhance life and magnify ability. And yet our working environments and the human systems that surround them appear to have emerged from a putrefying process of anti-Schumpeterian destruction creation. They (we) disengage to survive, to endure ill-conceived meetings, badly-laid plans, as well as the waste, day by day, minute by minute, of their (our) lives.

And if, by chance or cunning, we accumulate sufficient power, sometimes we unwittingly pass on the causes of organisation pathology, forcing employees (who, like school kids, must cope without a "don't buy" option) into what is equally "stale, bland, and almost entirely from the past". And all this because of the accumulated cultural foolishness that lets people get on, get by, and tune out.

How to effectively handle a complaint

My daughter experienced real problems adjusting to primary school. Eventually after several run-ins, she switched to a new teacher where there were no problems. It seems that the cause of the problems with the first class was that she needed to, 'learn to stop asking so many questions'... and at work I experience pretty uch the same reactions from my boss: 'Improve things', he says, 'but don't ask too many questions - we don't want to rock the boat'!?!

Something I read about gifted children:

Mom: What do you do with children who seem to know all of the material that is being taught in their class? Principal: Well, the really bright ones just learn to smile and nod their heads when they know all of the answers.

Fast Food Nation had a section that talked about 'A 1999 survey by the National Food Service Security Council, a group funded by large chains, found that about half of all restaurant workers engaged in some form of cash or property theft - not including the theft of food. The typical employee stole about $218 a year; new employees stole almost $100 more. Studies conducted by Jerald Greenberg, a professor of management at the University of Ohio and an expert on workplace crime, have found that when people are treated with dignity and respect, they're less likely to steal from their employer. 'It may be common sense,' Greenberg says, 'but it's obviously not common practice.' The same anger that causes most petty theft, the same desire to strike back at an employer perceived as unfair, can escalate to armed robbery. Restaurant managers are usually, but not always, the victims of fast food crimes. Not long ago, the day manager of a McDonald's in Moorpark, California, recognized the masked gunman emptying the safe. It was the night manager.' Talk about enraged NOT engaged!

Walter C. Uhler had an essay in Atomic Scientist with the same title that argued that USA policy towards Iran had failed to engage the Iranians over 25 years because it opted to threaten ('bombed back to the stone age'...) leading to enraged citizens (or at least a climate in which enragement is always likely) and advised that it would be more effective to engage by respecting their right to use nuculear technology...Just thought it was relevant.

First let me say that Clara in Florida is living in a fantasy world; I am sure Hitler during the second world war was only planning to use all those ovens for baking bread! Sorry Clara; pacifism never got us anywhere...please take a history lesson or two.

My comment is that I liked your article very much but I am frustrated that many articles point out a serious problem and no solution or a problem that has no solution. Let's be honest; I am enraged when I hear our politicians saying that what we need to do is spend more money on our schools. Apparently the billions that are now spent on our mind numbing, waste of time, failed education system is not enough for them. What we need is innovation, more accountability which is non-existent thanks to the Teachers Unions, and smarter ways to educate our kids. For example, kids would learn alot more about world history that they do now just by having them watch a history channel TV program and have then report back on! Our kids are falling way behind the world in science and math all the while we are teaching them stupid stuff that has no impact whatsoever in their lives or on thier job outlook.

Can anyone tell me what we can do or should do about our mind numbing education system? There is nothing our government will do because our schools are run by Teachers Unions who don't care beans about our kids. Why do we need a teachers union anyway; do they get mistreated in the workplace?

Disengagement: when the flame dies

The real test of employee engagement

Exciting work is key to engagement

How to engage employees