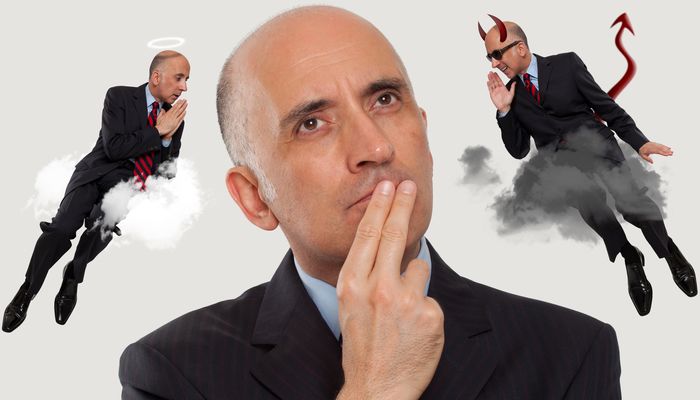 Angel and devil from Shutterstock.com
Feb 18 2016 by Brian Amble Print This Article

Russell Johnson, associate professor of management at Michigan State University, suggests that ethical conduct can have unpleasant side-effects. Not only can it cause mental exhaustion, but it can also lead to bosses feeling that they have earned the right to act in a negative manner and lash out at employees - a phenomenon known as ‘moral licensing’.

"Ironically, when leaders felt mentally fatigued and morally licensed after displays of ethical behavior, they were more likely to be abusive toward their subordinates on the next day," said Johnson, an expert on the psychology of the workplace.

For the research, published online in the Journal of Applied Psychology, Johnson and MSU students Szu-Han Lin and Jingjing Ma surveyed 172 supervisors over a several-day period in various industries including retail, education, manufacturing and health care.

Johnson said it's not easy to be ethical, as it turns out. "Being ethical means leaders often have to suppress their own self-interest (they must do 'what's right' as opposed to 'what's profitable'), and they have to monitor not only the performance outcomes of subordinates but also the means (to ensure that ethical/appropriate practices were followed)." Ethical behavior led to mental fatigue and moral licensing, and this led to leaders being more abusive to their workers. The abuse included ridiculing, insulting and expressing anger toward employees, giving them the silent treatment and reminding them of past mistakes or failures.

To combat mental fatigue, Johnson said managers should build in time for breaks during the workday; get sufficient sleep; eat healthy and exercise; and unplug from work outside of the office (which includes shutting off their smart phone at night).

Dealing with moral licensing is trickier, as there is not much research on the subject. However, Johnson suggested companies could consider formally requiring ethical behaviour in order to ‘normalize’ it.

"If such behavior is required, then it's more difficult for people to feel they've earned credit for performing something that is mandatory," he said. "A sense of moral license is more likely when people feel they voluntarily or freely exhibited the behavior."

Ethical behavior could also be formally rewarded with social praise or money. But the praise or bonus should come relatively soon after the ethical behavior in order to counteract the moral licensing, Johnson added.

The ripple effects of workplace lies

Does your boss have an honest face?