Taking the fight to ISIS 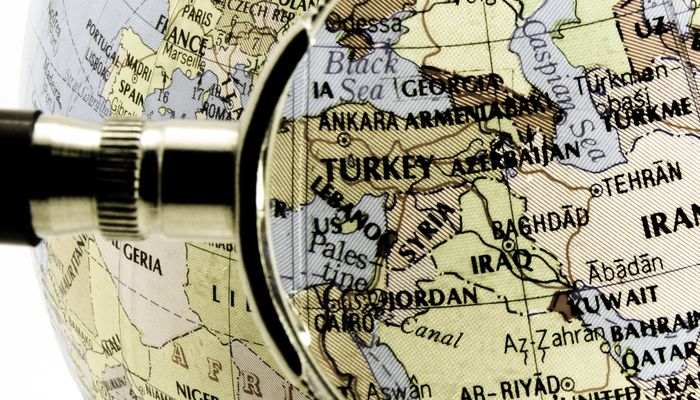 Close-up of the Middle East from Shutterstock.com
Nov 24 2015 by Jean-François Fiorina Print This Article

“France is at war,” President Francois Hollande declared last week. But declaring war is just the start. Actually carrying it out raises a host of other questions.

“France is at war,” President Francois Hollande declared in his speech on Nov 16 to a joint session of the senate and the national assembly three days after the ISIS attacks on Paris. Pledging to increase spending on the security forces and the army, he also made it clear that France’s national security is more important than Eurozone budgetary commitments. “I consider that in circumstances, the security pact prevails over the stability pact,” he said.

While that reference to EU spending limits is an acknowledgement that when we talk about “war” we are actually talking about a "war effort", the President nevertheless avoided spelling out what sacrifices might need to be made.

Everyone agrees that this “war” - which in reality already started several months ago - will be long, difficult and expensive. But to what extent is France going to be prepared to reverse planned cuts in defence spending and expand its armed services?

According to many specialists, budgetary pressures mean that the French armed forces have already reached their operational limit. According to General Vincent Desportes, former director of the national War College, even if the order was given, the French army would be unable today to deploy in any meaningful way to a new theatre of operations, especially one as complex and tense as Syria.

But of course, the level of a “war effort” is also dependent on what people are prepared to accept and pay for - a particular concern in a country where the tax burden has reached its limits. Moreover, prioritizing military and security spending over France’s treasured social safety net would also be a dramatic "cultural revolution" and a profound break with the continuous reduction in military spending since the end of the Cold War.

President Hollande, however, seems to have taken the decision to burden the country’s already-shaky public finances with more debt. War, after all, has always been financed by borrowing, although the reality of the French budget deficit is that savings are going to have to be made somewhere. This is particularly sensitive because the attacks in Paris risk undermining a very fragile recovery - just 0.3% growth in Q3 2015, mirrored by an equally fragile 0.3% increase in consumer spending and a 0.7% rise in business investment.

How far this all-too tangible terrorist threat will impact on households and business remains to be seen. But there’s no doubt that some sectors are much more vulnerable than others. Writing in Le Monde last week, Tangi The Liboux, a strategist at Aurel BGC, observed:

"If Paris is attacked again, foreign consumers will not take the risk of a break in the capital, maybe not even elsewhere in France. Airlines, transport infrastructure groups [ADP, Eurotunnel], luxury goods sellers and hotels - those sectors that depend on tourism and consumer spending - will be the first affected.”

And if those sectors stagnate or contract, where does the state turn to for the resources to fund its war effort?

What is the strategy?

Another fundamental question we need to ask about this war is ‘what is the strategy behind it?’ In an enlightening analysis in theconversation.com, Olivier Zajec, a defence specialist and lecturer at the Université Jean-Moulin Lyon III, points out that embarking on a war without first defining its objectives risks repeating all the mistakes of the War On Terror during the Bush years.

In fact, any comprehensive strategy has to be global. Naming an enemy is to define him, but also to define yourself in relation to him. By refusing to qualify Daesh [Daesh is an acronym for the Arabic phrase al-Dawla al-Islamiya al-Iraq al-Sham, or ISIS, ed] as an Islamist entity that has grown out of the Salafist radicalization that has been taking place in the Muslim world for decades, the French President leaves this fundamental question open. And that risks maintaining a lot of confusion, particularly as regards to any "war aims" that can reasonably be set.

Winning the war against Daesh will require financially weakening it and eradicating it from its sanctuary in the so-called ‘Caliphate’ that now covers large parts of Syria and Iraq. Both objectives are linked, as the Islamic State derives most of its revenues from the exploitation of local resources - probably more than half comes from selling oil and gas.

Doing that will require some big changes in foreign policy, most notably mobilising Iran and Russia as allies, something Francois Hollande has initiated with his idea of “one great coalition". But it also demands a will to find a political solution to the conflict, including reconnecting - even informally and indirectly - with Bashar al-Assad.

Then there’s the question of rebuilding our policy towards Muslim countries and clarifying our position towards Sunni states that have - to say the least - an ambiguous attitude towards Islamist movements (Turkey, Saudi Arabia, Qatar, etc), and reassuring Iraqi and Syrian Sunnis, whose anxiety and resentment feeds the Salafist jihadism.

As Olivier Zajec put is, this probably means resisting the temptation to impose another “external coercive democratization” - in other words, learning from the mistakes that made when that process was tried - and failed - in Iraq after 2003, Afghanistan after 2004 and Libya in 2011. Instead, he suggests a remodelling of Middle Eastern borders once the military obstacle of the Islamic State is removed and a creating new territorial organisation that would guarantee political representation and security for all parties and communities.

What is the future?

This last point is crucial, because the war is also being played out at home. As President Hollande underlined, we must fight the development of Salafism and all forms of fundamentalism within Europe’s Muslim communities, a goal that goes beyond security measures and wishful thinking that marked "the Charlie spirit" after the attacks in January.

The critical issue that arises here is one of integration. How far can Muslim communities be integrated into French and European civilization - into to our values, our culture and our lifestyle - without leading to radicalization? But that begs the question, who are ‘we’? - and since that touches on fundamental issues of identity, it’s one that is unlikely to produce any quick or easy answers.

Then there is the time factor. In contrast to the political calendar, war is a long-term project that can be undermined by hastily-taken measures, short-term political expediency or a lack of continuity in decision-making. It’s easy for politicians to yield to demands for ‘action’, but they need to take the time to ask the right questions and put in place the right medium and long term strategies that avoid creating yet more serious problems in the future.

Finally, they need to ensure that engaging in this war imposed on us by jihadist fanatics does not lead to the decline of the rule of law or to the sacrifice of our fundamental freedoms. Otherwise, the war will be lost before it has even begun.