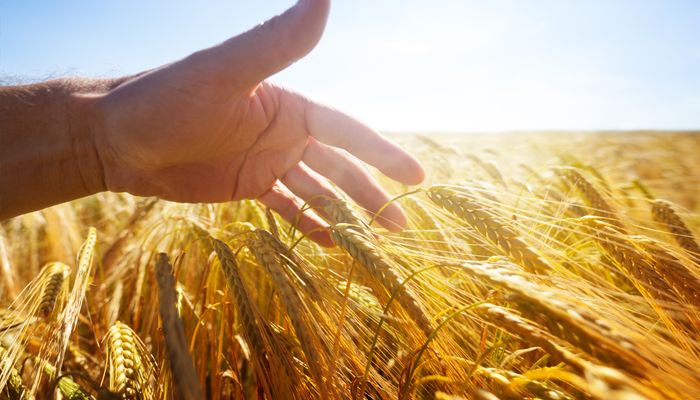 Hand touching an ear of barley from Shutterstock.com
May 13 2015 by Jean-François Fiorina Print This Article

From May 2 to October 31, Milan hosts the 2015 Universal Exhibition. This year's theme is a fundamental one: Feeding the Planet, Energy for Life.

Hunger is a daily reality for more than one in 10 of the world’s population. But as Jean-Paul Charvet asked in his book, Atlas de l'agriculture (Autrement, 2012), how will we feed the world in 2050, when the world's population isn’t seven billion, as it is today, but nine billion?

This isn’t just a humanitarian and economic imperative, but also a matter of "food insecurity", the repercussions of which will have geopolitical implications for both ‘poor’ and ‘wealthy’ countries alike.

The Milan 2015 Exhibition invites visitors to "to reflect upon and seek solutions to the contradictions of our world.” It’s estimated that almost 900 million people were undernourished in the period 2010-2012. Yet elsewhere in the same period, some 2.8 million others died from diseases related to obesity or to being overweight. Beyond that, the world wastes some 1.3 billion tons of food every year. “For these reasons, we need to make conscious political choices, develop sustainable lifestyles and use the best technology to create a balance between availability and consumption of resources."

Last year, a report by the World Bank and the FAO (Food and Agriculture Organization) predicted that "over the long term, agriculture as we know it will be unable to meet human demand due to a lack of farmable land and insufficient water." That’s a prospect that poses a fundamental threat to global stability and demands that we find solutions to the food conundrum.

The main challenge is access to resources. Less than a third of land in developed countries is dedicated to agriculture (a little less than five billion hectares out of a total 15 billion). These agricultural systems are very diversified and unequally distributed around the world. This distribution reflects historical traditions and geographic constraints.

This situation explains the fact that certain countries are the world's principle exporters of wheat, rice and corn, which are the basis of our nutrition, notably the United States, Canada, EU, Russia-Ukraine-Kazakhstan, Australia, Argentina and to a lesser extent Turkey and China.

Over time, farmland has become a resource that is more and more rare: "Between 1980 and 2005, the surface area of farmable land only increased by 4.5% - mostly in Southeast Asia, Africa and Latin America - while the world's population increased by 45%." This slow development of farmland has been amplified by urban sprawl, competing industrial production (such as cotton) and the need for water.

As a result, farmland has become a strategic resource and the outsourcing of agricultural production has become increasingly important. China is the most high-profile example of this, making a concerted effort to acquire arable land in Africa, as well as in Latin America, Europe and Australasia. But many other countries also buy or rent farmland outside their borders - India, Japan, South Korea, Saudi Arabia, Bahrain, Qatar, UAE, Egypt and (until recently), Libya.

In decreasing order according to available hectares, the countries meeting this demand for farmland are Indonesia, Sudan, Uganda, Philippines, Argentina, Russia, Senegal, Ethiopia, Pakistan, Malaysia, Ukraine, Madagascar, U.S.A, Mali and Laos. This phenomenon continues to grow in the name of "food security", a fact that has pushed land prices upwards.

The volatility of food prices

The first decade of the 21st century saw the liberalization of agricultural markets and consequent shockwaves that pushed prices up, in particular grain prices. This situation brought back fears of famine and 50 or more countries are regularly faced with this risk.

"Overnight, countries weakened by liberalization had to face old fears of 'flour wars' and grain laws." explains Gilles Fumey in his book Géopolitique de l'alimentation (Editions Sciences Humaines, 2012). One explanation for this shift is of course the increase in demand. As population continues to rise so does demand: "28.5 million more mouths to feed each year!"

But this increase is also qualitative with the development of new tastes by middle classes and urban populations in emerging countries such as Brazil, India and China.

"Traditionally, the Chinese were primarily consumers of grain and vegetables with only a little pork,” Fumey says. “But now, they have become much more meat-oriented with annual meat consumption per person having increased from 20 to 50 kg according to the FAO. This has had a strong impact on the demand for grains used in animal feed."

To this, we can also add the impact of meat processing in terms of water and energy.

Many studies have focused on this sudden rise in prices. Benoit Daviron, a French agronomist and agricultural economist at CIRAD, has highlighted three broad perspectives that can be used to understand the recent food market phenomena: the natural volatility of food prices (in particular due to their dependence on weather conditions), the low-level of public investment (both in terms of production and use of agricultural products) and finally the difference between supply and demand. "A sudden rise in prices is an indicator of a consistent shortage in agricultural markets."

In addition to this, like all markets for raw materials and rare resources, agriculture is subjected to heavy speculation. It's for this reason the OECD believes "concrete measures must be implemented to ensure minimum stock levels" all the while developing active policies to control demand in both hemispheres.

According to Gilles Fumey, "four intertwined factors explain the pressures exerted on the food market: demographic pressure, economic growth, global warming and serious political mistakes in the management of agriculture."

A perfect illustration of these political mistakes would be the priority given to the agribusiness whose key international players (Monsanto, DuPont Pionneer, Kraft Foods, Unilever, etc.) are major consumers of industrial fertilizers, pesticides and other GMOs. But the intensive production they champion has demonstrated its limitations and opened the way for a return to traditional agriculture based on sustainable and fair practices.

"Modern nutrition is derived from two cultures, but one of them is more destructive than the other,” Fumey continues. “In terms of global geopolitics, the playing field is not level. However the 2008 crisis served to confirm that to fight hunger and encourage quality, traditional agriculture is our best bet."

This is in particular due to the fact that on a local level we have seen a return towards Malthusian behaviors that were typical of Europe for centuries and served as a means of naturally regulating both economic and demographic growth through resources. In his book Agricultures africaines et marchés mondial, (Fondation Gabriel Peri, 2007) agronomist Marc Dufumier advocated a "highly environmentally efficient agricultural economy" and argued that it’s perfectly possible to increase productivity through organic techniques.

This is important, too, because of the symbolic link between farmers and the land: "If we are what we eat, then we cannot ignore the fact that the (food) industry is unable to fully meet this expectation."

Finally, as the 2015 Universal Exhibition points out, we must also "implement sound policies, develop sustainable lifestyles and even use cutting-edge technology to find a balance between our consumption and available resources."

Among new possibilities, the ocean offers the chance for a solution. As explorer and oceanographer, Jacques-Yves Cousteau, put it, "the necessity to feed an ever increasing population will force us to rely on the ocean through new understanding and also new technology."

Cousteau, of course, was also a renowned environmentalist whose pioneering work brought to public attention as never before the disastrous environmental consequences for our oceans of human activity. So in future, it is critical that aquaculture does not make the same mistakes as agribusiness and that France - whose overseas territories mean that has the second largest maritime space in the world - remembers Cousteau’s warning: “For most of history, man has had to fight nature to survive; in this century he is beginning to realise that, in order to survive, he must protect it.”