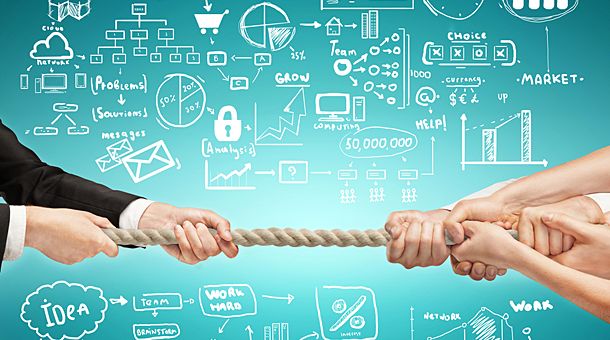 In the modern workplace, it's hard to think of anyone who works in isolation. Collaboration with others is a fact of life. But a dog-eat-dog culture and the cult of the individual appears to be undermining the ability of Americans to work with one another, with a recent survey from the University of Phoenix revealing that over eight out of 10 adults find working with other people a challenge.

The online survey of more than 1,000 employed American adults found that 84 per cent think that working on teams is difficult, with six out of 10 adding that inadequate training was the prime reason they weren't able to work more effectively with others.

The reasons why people find collaborating with others to be so difficult and that teams fail are illuminating, with almost half those questioned (45 per cent) pointing to an "in-it-for-one's-self" mentality in the workplace.

Workload is also an issue, with four out of 10 saying that a being expected to do too much with too few staff means that there's less time for team efforts.

That echoes the findings of a recent UK survey which found that more than nine out of 10 office workers now prefer to communicate using email rather than the telephone and almost a quarter admit that telephone communication makes them nervous.

When respondents were asked specifically about why team efforts in the workplace fail, the focus on the individual versus the team was even stronger. Six out of 10 of those questioned who said that teams often fail in the workplace say that part of the problem is that individuals are more motivated to be individually successful. Just more than half of these respondents also felt that a lack of clearly-defined roles contributed to team failures.

Lack of proper training, however, was the most often-cited reason for why teams often fail in the workplace, with six out of 10 (61 per cent) pointing to this as the root of their team-working problems. Moreover, only a quarter of respondents who were college graduates said that teamwork was a focus during their college education.

But apart from deep-seated individualism, a January 2013 University of Phoenix survey identified several other factors that might be contributing to Americans' reticence to engage in teamwork.

It revealed that four out of 10 of those who have worked on a team in the workplace have witnessed a verbal confrontation among team members, with 15 per cent saying that this had actually turned physical. Four out of 10 also said that they had seen one team member blaming others for something that went amiss and a third said they had experienced a team member starting a rumor about another team member.

With co-workers like that, no wonder so many of us feel that working with others can be like swimming with sharks.

What makes a growth leader?

Real rules need to be explicit

Too much one-on-one can damage team dynamics

Getting your team to demonstrate their motives

My team is dysfunctional: help!