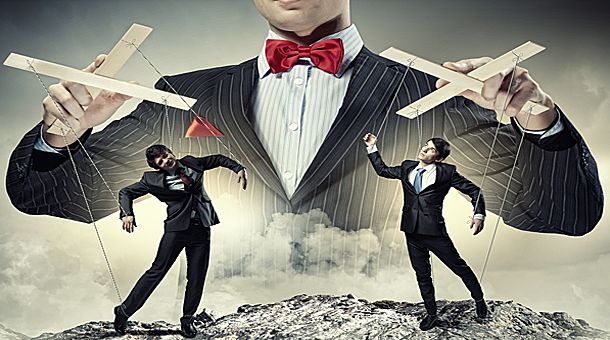 Despite considerable evidence that hierarchical organizational structures encourages group-think and hamper innovation, forceful individuals such as Bob Welch, Larry Ellison and the late Steve Jobs are still held up as role models for corporate leadership.

But a new paper published in the October issue of the Academy of Management Journal argues that far from pushing their organizations to greater levels of achievement, strong leaders can actively undermine performance thanks to the twin evils of power dependence and the devaluing of subordinates.

According to Leigh Plunkett Tost of the University of Michigan, a co-author of the paper with Francesca Gino of Harvard and Richard P. Larrick of Duke, "it is widely thought that a penchant for power is basic to effective leadership. Our findings suggest otherwise."

"Having a formal team leader isn't a problem per se," she said. "It becomes one, though, when that leader equates leadership with power and proceeds to dominate team interactions while discounting the potential of other team members to contribute."

The conclusions were based on three experiments, all of which randomly chose team leaders and primed them to feel a heightened sense of power.

In one experiment, a web-based simulation of a Mount Everest expedition that was developed at Harvard Business School , team leaders who received the power prime accounted on average for about a 33 per cent of the talking in their teams, compared with 19 per cent for non-primed leaders, while their teams achieved a significantly lower level of the exercise's goals.

In another experiment, participants were divided into four-person teams and asked to make a decision that depended on each group's ability to share information. Half the designated team leaders were power-primed and half were not; in addition, half the leaders were reminded that all team members had the potential to contribute to the team's success, and half were not.

The result was that not a single one of the teams with leaders who were both power-primed and unprodded about their teammates reached the right decision. In contrast, more than half the remaining 29 teams did.

According to the study: "feelings of power produce a tendency to devalue the perspectives, opinions, and contributions of others...When leaders were reminded that all team members had the potential to contribute to the team's success, these effects did not emerge." Considered in conjunction with other research, these findings become even more significant. For example, a 2010 study by The Nielsen Company found that companies with less senior management involvement in the product development process generate 80 per cent more new product revenue than those with heavy senior management involvement.

In other words, keeping corporate leadership away from the nitty-gritty of product development does wonders for the bottom line.

Similarly, Wharton professors Christian Terwiesch and Karl Ulrich and INSEAD professor Karan Girotra found that the presence of senior management in meetings only encourages conformity and group think: "In a typical brainstorming meeting, it's not fair and everybody knows it: The boss is always right," Terwiesch said.

So what are the antidotes to strong leadership? The new study suggests maintaining a relatively flat organizational structure and egalitarian culture and training leaders to cultivate high levels of authority openness and to encourage open team communications. It also recommends instituting "practices and policies that serve to remind leaders of the important contributions their subordinates have the capacity to make."

Finally, and perhaps most difficult, it recommends encouraging "all members to question the legitimacy of formal leaders who take a dominating approach to social interactions." Ok, but after you . . .

"When Power Makes Others Speechless: The Negative Impact of Leader Power on Team Performance," is published in the October/November issue of the Academy of Management Journal.

Leadership and the nature of confidence

Team-working benefits from an outsider on the inside