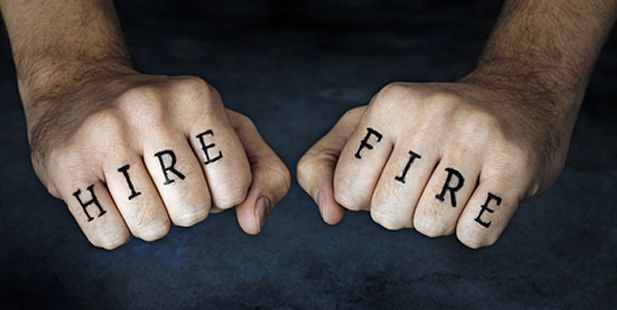 Few things polarize opinion quite as strongly as tattoos. But while you might argue that tattoos have nothing to do with someone's ability, commitment or customer service, as far as job-seekers in the UK are concerned, having visible tattoos is the kiss of death.

According to new research by Dr Andrew Timming of St Andrew's University School of Management, no matter how well-qualified a job-seeker might be, the negative perception of body art on the part of customers meant that they were far less likely to be employed.

Dr Timming interviewed recruiters in 14 organisations including a hotel, bank, city council, prison, university and bookseller to get a broad view of their opinions on tattoos. The managers ranged in age from 30 to over-60.

Speaking at a conference organised by the British Sociological Association, Dr Timming said that while he personally liked tattoos, "most respondents agreed that visible tattoos are a stigma."

One woman manager told him that "they make a person look dirty". A male manager said that "subconsciously, that would stop me from employing them." Another male manager said "tattoos are the first thing they [fellow recruiters] talk about when the person has gone out of the door."

Even those managers who had no personal objections to body art said that they would think twice about taking on someone with a tattoo because they fear it would damage their corporate image, Dr Timming found, with some of the objections being expressed in uncompromising terms.

"Hiring managers realise that, ultimately, it does not matter what they think of tattoos. What really matters, instead, is how customers might perceive employees with visible tattoos," he said.

"Respondents expressed concern that visibly tattooed workers may be perceived by customers to be 'abhorrent', 'repugnant', 'unsavoury' and 'untidy'. It was surmised that customers might project a negative service experience based on stereotypes that tattooed people are thugs and druggies."

However it also emerged that there are certain jobs in which tattoos might actually be desirable. One interviewee, an HR manager at a prison, noted that tattoos on guards can be 'something to talk about' and a useful way for a guard to make a connection with the prisoners.

Similarly, not all tattoos were regarded in the same negative light. The negative attitude did not extend to tattoos that could be easily concealed by clothing, with images such as flowers or butterflies seen as largely innocuous. Visible military insignia were also acceptable because they are seen as a badge of honour.

In fact, three of the managers interviewed for the research had concealed tattoos. According to Dr Timming, one "was so proud of his body art that he somewhat humorously took off his shirt, exposing his naked torso".

But the line of acceptability is drawn at things like "a spider's web tattooed on the neck; somebody being hung, somebody being shot; things to do with death; face tears, which suggest that you've maimed or killed; something of a sexual content; anything with 'drug connotations'; and images with racist innuendo such as a swastika."

However it's not all bad news for body art aficionados. With around one in five people in the UK now sporting some sort of tattoo, there was broad consensus among the mangers interviewed fo the research that visible tattoos will inevitably gain greater acceptance in the wider society in the not-too-distant future.

"Several respondents pointed out that intolerance to tattoos is currently strongest amongst the older generations. That, coupled with the increasing prevalence of tattoos in younger people, points to a future in which body art will become largely normalised and accepted," Dr Timmings said.

"Tattooed applicants can take comfort in the fact that the stigma associated with body art appears to be on the wane and that, as a corollary, there will likely be an increase in the number of potentially sympathetic tattooed hiring managers."

My manager is my friend - and she's not doing her job

To ink or not to ink

What NOT to wear