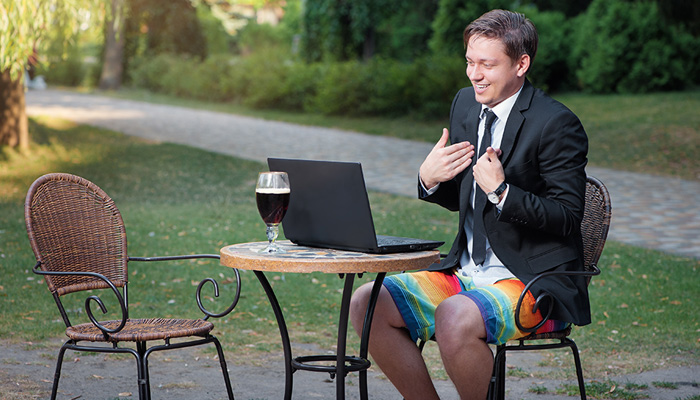 Everyone knows that if you work from home once everyone else returns to the office, you've obviously decided your career doesn't matter. Right?

A recent article on Insider.com includes remarks made by Morgan Stanley CEO, James Gorman, who has some strong views about remote work and believes we need to go back to the office as soon as possible. We're going to share a few of his more controversial notions, along with some questions those ideas raise.

"A lot of us have gone into the mindset of 'Jobland'. If you're in 'Careerland' you need to be around other people."

Prior to the pandemic, this was the implied, if not actually stated, approach from a lot of big organizations to remote work. If you chose not to come into the office, you might do your job just fine, but don't expect to be on a career track. What Gorman is saying is that it will be an explicit policy at Morgan Stanley.

It's certainly every organization's right to create the culture they want. Many feel the advantages of being in close proximity to each other is great for innovation, engagement, and efficient work and outweighs the convenience of working from home. It does, however raise several questions. First, in an industry notoriously hard on work-life balance, has anyone really learned anything in the last two years, or is the way things were in the "before times" the only way to be successful?

What impact will that explicit policy have on recruitment and retaining of people? Sure, the people who are simply doing a job might be okay with that. What about people who are serious about their career, just not willing to go back to the 1980s?

This is a huge issue for organizations who are recruiting workers. Do you pay people who live in high-cost areas more than you pay people doing the same job who live in areas with a lower cost of living? This is a slippery slope, and the answers aren't easy.

It's simple to say that this is the same reasoning that allowed for paying women and others less because "they aren't the main breadwinner." There's one school of thought that says there is an inherent value to the company of a certain job, and if you do that job at the same level as anyone else you should be paid the same. International companies already struggle with this. Do you pay someone in the Philippines the same rate you pay someone in London, even if that means they are making twice as much money relative to the cost of living?

A lot of people have moved away from expensive locations in the past year for all kinds of reasons. Do you cut their pay? Do you pay people in low-tax states less than you pay those whose states take a bigger chunk of their check? More people are becoming digital nomads. If they can do the job from Cabo San Lucas, even if their job is technically based in Silicon Valley, do you pay them less? More?

What will that do for retention and recruiting talent?

Can you develop career skills at a distance?

Gorman is also concerned about the extent to which people are able to develop 'career skills' while working remotely away from colleagues. Banking, and a lot of other industries, have traditionally used an internship and mentorship model. You learned by shadowing more experienced, successful people. In-person training is prioritized over any other kind of skill development. Can people learn vital skills from a distance? Is there one "best" way to develop talent?

This is a legitimate question. Another one is, "Do companies have a choice but to adapt?" Is there an optimal mix of in-person and remote training, communication and brainstorming? There probably is, but if I'm a CEO of a 90-year-old institution, I'm going to be super-cautious in changing a system that's worked up until now.

It's tempting (and easy - so easy - I'm trying to be fair, here) to mock someone who has been wildly successful under an existing system for not being willing to throw out decades of success. Reading the comments on articles like this, there is a smugness to many proponents of remote work, most of whom are individual contributors and don't have to be responsible for the fallout of a changing business model.

But it's also indicative of the scale of change we will go through in the coming years as we change the foundation of what it means to work.

Returning to work: what do employees actually want?

Make your people part of the solution, even virtually