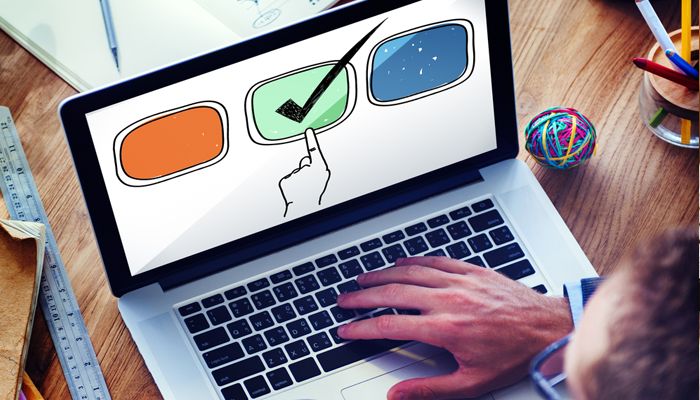 Image from Shutterstock.com
Jul 09 2020 by Wayne Turmel Print This Article

Ever hit “reply all” when you probably shouldn’t? Or stopped what you’re doing to read an incoming email even though it will get in the way of more important work? More often than not, we react rather than respond. And that can often that leads to trouble, especially for managers.

The two words get used interchangeably, but they aren’t exactly the same thing. In neuroscience, where it actually IS brain surgery, they define the difference this way; the reaction is the first, usually involuntary, thing we do when presented with stimulus. The response, then, is what we do after that. For example, a sudden noise might make us flinch (that’s a reaction) but when we realize it’s just the window shutter banging in the wind, we respond with a sigh (or a curse, because now that means you’ve got to get off your butt and do something about it) and go on about your business.

When we react, rather than mindfully respond to stimulus at work, the result is often less than optimum. When we react to bad news by flying off the handle, we might be creating an environment where people choose not to proactively inform you about situations you would otherwise want to hear. When someone asks you to reattach a file to an email, rather than go look for it themselves on the network and you don’t respond by reminding them that they know jolly well where it is, you not only interrupt your own work, but pretty much ensure future requests of the same type.

By reacting, rather than considering an appropriate response, we temporarily solve the symptom (the person needs the latest file) but don’t solve the overriding problem (that they can’t, won’t, or don’t know how to, use a tool everyone else uses that can spare everyone time and effort.)

Complaints that we don’t have time are usually untrue. The human brain fires neurons and records reactions to visual stimulus in somewhere between 18-100 micro-seconds. Even if you count to five before responding, that’s less than five seconds it takes to avoid a lot of problems.

When working virtually, this problem is magnified because we’re working with less data. We get a piece of data (say, an email announcing someone will be late on a deliverable). We can’t see their embarrassment, or hear their own frustration, we simply snap back an email that says “this is unacceptable.” We don’t really know how that will be received, or whether we’re making a bad situation worse, and at the end of the day it doesn’t really help. We’ve reacted to news, rather than responded in a constructive way.

Understanding the difference between reaction and response has actually helped ease my guilt as a manager. My sometimes less-than-helpful reaction (thoughts of homicide, for example) are perfectly normal and even understandable. As long as that isn’t my response, it’s my little secret.

Next time you are handling a stressful situation, ask yourself. Are you reacting or responding? Wait five seconds and ask it again.

How multitasking and e-mail waste time