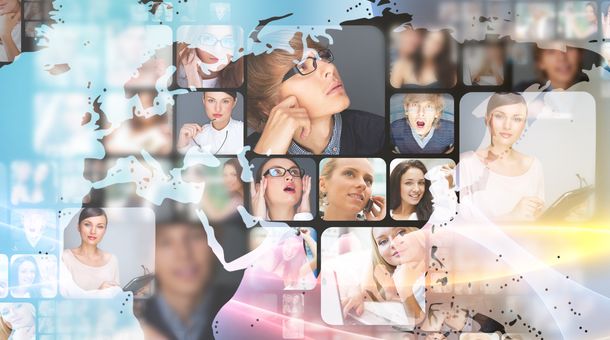 Image from Shutterstock.com
Oct 04 2016 by Wayne Turmel Print This Article

As a Canadian living in America, I’m going to blow the whistle on something I’ve noticed that most people don’t want to say, and I’ll probably ruffle a few feathers. On international conference calls, the North Americans cause the most disruptions and interruptions. To be specific, almost everyone can deal with foreign accents except (North) Americans.

Case in point. This week I was on a virtual meeting with 12 people from all over Europe and the Middle East. None were native English speakers, in fact many were working in their third or fourth language. Everyone understood each other perfectly. Then the American got on (and yes, in my experience Canadians are slightly better at deciphering accents than their American brethren, but that’s no reason to get smug) and immediately there were constant requests to repeat things because “I didn’t understand what you were saying,” or “I’m sorry, I can’t understand you with that accent.” It was actually kind of embarrassing.

Why is this the case? I think there are a couple of reasons, and some simple ways to combat the problem.

The first reason, is that most parts of the world, people in the workplace are multilingual. They are used to doing quick translations in their heads at the speed of conversation. Since the vast majority of Americans are unilingual (speaking only what we call English), we are less quick on our feet when it comes to identifying phrases that might not be exactly what we’re familiar with, or compensating for phonetic challenges.

A really common phonetic challenge is that many languages don’t have a hard “v” sound, and substitute what sounds like a “w”. So, a word like “survivor” becomes “surwiwor” to our ears. We’re so busy asking “what the heck is a surwiwor?” that we miss the point being made.

Then you can layer on cultural differences that also get in the way. For example, many cultures don’t like to directly criticize each other (something we’re not really troubled by). Therefore, there is a lot of preamble going on before a point is made. During that time our North American brains are so busy screaming “what’s your point?” that we miss it when it should be clear.

The problem isn’t with our ears, it’s with the receptors in our brains. Now, before the rest of the world gets all puffed up, understand this isn’t a voluntary response. We don’t choose to be the problem, and we (at least the vast majority) don’t do it out of malice or a sense of smug superiority. It’s a legitimate challenge.

So here are a couple of things we can do:

Use webcams whenever possible. Subconsciously we read lips and body language as well as pick up auditory cues when we “listen”. Getting additional visual and non-verbal input along with speech goes a long way to compensate for communication gaps.

Don’t be afraid to use the chat in virtual meetings. Very often people with English as a Second language are understood better in writing. Private chat is also useful for asking a colleague for a rephrase of what was said without interrupting the entire meeting. Don’t be embarrassed to use it.

If you’re having trouble understanding someone, own it. Ask for clarification by rephrasing and repeating what you heard (often as it comes out of your mouth it will make more sense.) If you do have to have someone repeat something, apologize for your lack of understanding. If you can see that someone is struggling, offer to help them out by jumping in so that you’re working as a team, not pitting people against each other.

As we get more used to working across languages, cultures and borders, we will sharpen the skills needed to communicate better with others. Remember that the ability to work this way has happened in less than a generation. It will take time, practice, and patience. Lots of patience.

Stick with us. I swear we’re not beyond help.