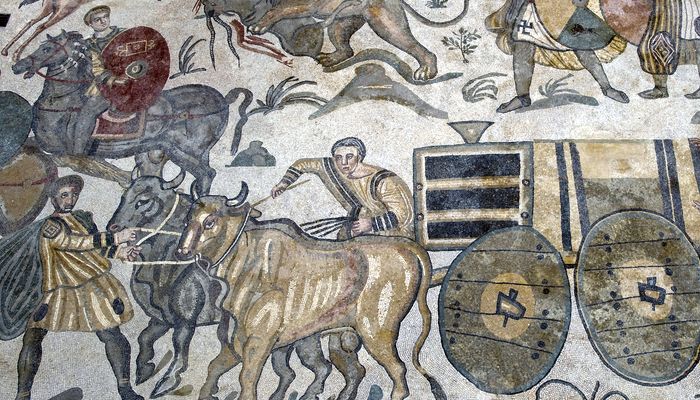 “I also lay aside all ideas of any new works or engines of war, the invention of which has reached its limit and in which I see no further hope for further improvement”

It’s easy to look back in time and make fun of anyone who thought that a) technology had reached its zenith with the invention of the gladius, and b) people would ever stop finding new ways to kill each other. Don’t be so quick to judge.

When Sextus Julius Frontinus made this statement in about the year 80 or so, he meant every word. It’s important to remember that this was no foolish drunkard spouting off on some muddy street corner in Londinium. He was one of the smartest men of his time. He wasn’t anti-technology, in fact he was one of the lead designers of the Roman aqueduct system and helped lay the groundwork for modern London. (The tube system cannot, however, be blamed on him).

The point is that Frontinus just didn’t want to hear about new weapons systems or see money spent on them. Replace “weapons ” with “communication technology” and it begins to sound like an awfully familiar refrain.

What we’re doing works. For a long time, the Romans managed to breeze through Europe with a mix of great systems (the Legion) and superior weapons. Let’s face it, steel swords and horses beat wooden spears nearly every time. How good do you have to be when your enemy’s prime weapons are painting yourself blue and running naked in the Scottish weather (although that will certainly show you how tough they were)?

The point is, when what you’re doing works well, the need to do something different, or use different tools, or spend money on these new gizmos doesn’t seem very pressing. Oh, and senior management is seldom the first to see real problems on the horizon. If they can be convinced it won’t work soon, and there’s a real threat, they’ll act.

Money is a limited resource. Nothing has changed here. Leaders only have so much money to spend, and they have to be careful about where it goes. Getting money from Rome was a full time job, and if putting strong wooden walls around a city makes more sense than buying new weapons, those walls are going up and the weapons aren’t getting bought. Until the wall doesn’t work anymore. Can you show ROI for your tech rollout? Really?

We’re too busy fighting the enemies in front of us to think “big picture”. When you’re up to your neck in Saxons, Celts, Picts and other pesky local enemies, it doesn’t seem like a good use of time to worry about the Vikings, who were a whole ocean (or at least an awfully wide body of water) away, or the Huns, Mongols or Visigoths for that matter. Those were Gaul’s problems.

Of course the sudden fall of Rome meant a sudden decrease in spending and support. How does your change affect the company or team right now, and what does the future hold. If you can’t paint that picture in sufficient detail, that money isn’t coming.

I know what this does. That will require training and time we just can’t afford. Frontinus (and most good leaders) didn’t get their jobs by accident. Most worked their way up and had a pretty solid understanding of the job they were asked to do and what was required. That strength can become a weakness awfully suddenly. (“Hey, what are those boats with the dragons on them?”)

But training takes time and effort, and there will be a momentary drop in productivity while the new system gets online. You’d better have a darned good reason and be able to show proof of concept.

The thing is that there are perfectly sound reasons not to go chasing after every shiny new technology that comes along. Leaders are good stewards of company resources. Likewise, those of us toiling on the front lines aren’t always aware of how technology is changing and if new resources are needed. It’s easier to do what we do better, than to do something different entirely.

So before we start blaming “technophobia”, or “20th Century thinking in a 21st Century world”, let’s think about why people adopt technology (or don’t).

Are you hiding behind technology?