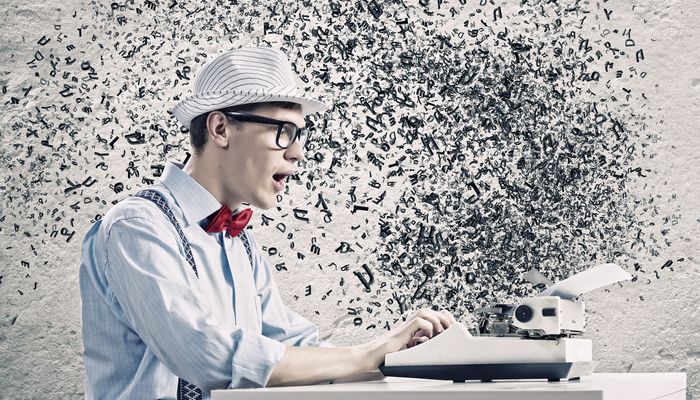 Words spewing from a typewriter from Shutterstock.com
Mar 02 2015 by Wayne Turmel Print This Article

One of the ways the world of work has changed, and not always for the better, is that we communicate much more in writing than at any time since the invention of the telephone. But the ease and speed of communication doesn’t mean we’re always clear, or efficient, or even very coherent.

Someone who has studied this to great effect is my buddy Phil Simon (a perfect example of my Rule # 1 for business success: surround yourself with friends who are way smarter than you). Phil is a frequent keynote speaker and recognized technology authority whose work has appeared in Huffington Post, Inc. Magazine, Harvard Business Review and elsewhere. He is the award-winning author of seven management books, the latest of which, Message Not Received, is launched today.

I asked him some burning questions about the way we talk to each other at work today:

So much of what we're doing these days is written (email, text, and IM) instead of spoken. How has this impacted business communication?

In short, it’s not good. We’re sending more messages than ever. Many of us either confuse quantity for quality or consciously don’t bother to make the distinction. Others take a sort of perverse pride in the number of emails they receive. It’s as if they’re their self-importance and sense of self vary in direct proportion to the size of their inboxes.

Employees have never been more overwhelmed, and recent research backs up that claim. We rely almost exclusively on email as the default tool for corporate communications. We send five emails when a one-minute phone call would suffice. It’s insane. The LexisNexis Workplace Productivity Survey reveals the extent of this problem.

Why is email the bogeyman? I remember when I got my first email account. I thought it was the best thing ever. What went wrong?

Let me be perfectly clear. There’s nothing wrong with email in the abstract. As I explain in Message Not Received, I love receiving an unsolicited note from a friend or a legitimate inquiry about my speaking services. Who wouldn’t?

But email fails us on several levels. First, it’s terrible for effective conversations because it gives the false appearance of one-to-one, in-person communication. For instance, consider a 2006 series of studies by two psychologists,Justin Kruger, PhD of New York University and Nicholas Epley of the University of Chicago. In short, Kruger and Epley wanted to determine if people were as good as they thought they were at discerning the subtext of a message.

They found that participants were only able to accurately communicate sarcasm and humor in barely half - 56 percent - of the emails they sent. And if that isn’t bad enough, most people had no idea that they weren’t making themselves understood.

Beyond that, email is often downright inefficient. We all know people who try to manage conferences and projects via email. They send mass emails to schedule meetings. This might have been acceptable fifteen years ago, but not anymore. There are far better tools for these types of activities, and it’s criminal that email has remained so dominant for so long. Scores of other tools are much better suited for truly collaborative work, never mind the old-fashioned phone.

Why do people use jargon and buzzwords so frequently?

People forget the meaning of the word ‘communicate’. Quite simply, it means “to make common”. Clearly many executives and rank-and-file employees have forgotten that. The business landscape is littered with terrible language from people who ought to know better.

Many business folks routinely forget their audiences. They forget - or have never heard Of - the curse of knowledge. We’ve all come across IT people who seem to speak a different language when dealing with non-technical employees. What happens? Employees roll their eyes, tune out, or simply don’t understand what’s taking place. But the web is also full of mind-numbing, vacuous marketing copy. Marketers and salespeople often speak in buzzwords and then wonder why their prospective clients don’t pull the trigger.

I’ve been railing against this for years, and it was time for me to channel those thoughts and suggestions into what I hope is an accessible, useful, thought-provoking, full-length text.

Why do teams need to knock it off?

As I say in the book, the world has never moved faster. I don’t see that trend abating anytime soon. If we don’t communicate well, we are extremely unlikely to achieve our goals. No one works in isolation, even in an era of unprecedented technology.

Phil’s work reminds us that just because we do something (a lot!) doesn’t mean we have stopped to consider why or how we do our work. Take some time today to assess the written communication on your team.