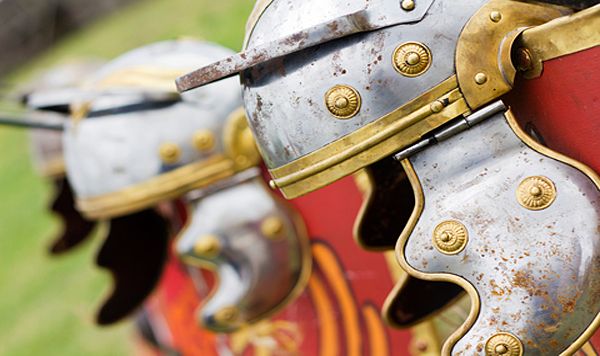 If you're having trouble getting your team to embrace webinars, video-conferencing or any of the dozens of other technological marvels that are supposed to make our work easier, take a lesson from the Romans. Back in about 80CE, Sextus Julius Frontinus (something of an engineering pioneer who was best known as an expert on aqueducts and was Rome's Water Commissioner), wrote:

"…lay aside all ideas of any new works or engines of war, the invention of which has reached its limit and in which I see no hope for further improvement". Because , you know, after the gladius we had all the ways we needed to kill each other we'd ever need, right?

This quote should give you hope for two reasons. First, while they may not have been open to new weapons, they used the holy heck out of the ones they had. The Romans did just fine without access to a searchable database of best practices or the ability to log into a meeting from Starbucks. Secondly, the resistance to new tools is as old as mankind.

It's not hard to imagine that your project team is like the Roman Legion in Britain. You're a long way from where the decisions are made and the idiots that make them. Your team is made up of people from all over the place speaking all kinds of languages but using one to communicate (okay it was Latin instead of English), and you're just trying to keep the blue-painted hordes (or the people in Sales) at bay.

What can we learn from this analogy?

Rome probably had warehouses full of weapons they weren't using. To me, this quote always sounded like a man who'd survived one too many vendor visits. Imagine some sales guy coming along with a sample case of swords and tridents. "Yeah, but this one has four tines, so it's better than the traditional trident". Probably tempting but was it worth the extra coins? Budgets were tight, then, too.

As long as it kept the barbarian hordes at bay, there wasn't any need to change. Hey, what they were using worked- and worked well. As long as they could keep the enemy on the right side of the wall, change was annoying, expensive and more trouble than it was worth.

The Romans used what they had to the fullest. While they might not have had machine guns or RPGs, the Legion used the weapons it had at its disposal.The shield, gladius and "turtle formation" worked pretty darned well. The Legion understood the value of drills, training and coaching to make sure that when the Picts came over the wall, they were good and ready.

Here's something important to remember in all this. Yes, the tools at their disposal worked very well for a very long time. Eventually, though, things changed. New techniques were invented. Hubris set in, and it wasn't long before the Goths were running the show (which is a strange image. All the managers looked like Marilyn Manson and had black lipstick. I might be wrong about this part).

The point is, at some point new tools and techniques were called for. Change is not necessarily bad. You don't want to be the person who chases any new tech trend or tool and never actually gets work done. On the other hand, you don't want to be Julius Frontinus either.

How well is your remote or virtual team getting work done? Could technology help? Do you need new tools, or just learn to use the ones you already have more productively?

Web meetings stink before they even start

Is IT finally getting it?

Why do so few people use webmeetings well?

How to get people involved in a webmeting