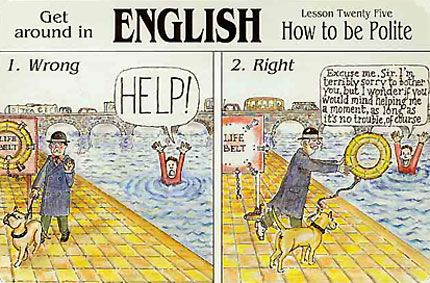 While I have occasionally ( and probably accurately) described as rude, it has never been intentional. Seriously. That being said, I firmly believe that being too concerned about being polite and nice has, in fact, had a negative impact on your ability to truly lead your remote or virtual team and get the most from them in virtual meetings.

In particular, there are two concepts that have reached mythical status that need to be re-examined. Not overturned completely, because they arose for good reason, but looked at a little more critically.

The reasons are simple. If the biggest complaints about webmeetings and remote teams are 1) a lack of participation or input, and 2) a lack of accountability - when people don't participate, contribute or follow up - then we have to examine how to change those problems. In the process, especially as you try to change the culture of your team, some tension is inevitable.

MYTH #1 A "collegial" atmosphere is critical to good teamwork and should be maintained at all costs.
The problem here is how the word "collegial" has come to be defined in too many groups. Wikipedia (I know, but it's where you go first, admit it) defines the word as "characterized by or having power and authority vested equally among colleagues". It means that people have equal authority to contribute and speak their minds (which is critical to honest feedback and good ideas). What it doesn't mean , and all too often does in some cultures, is that harmony is maintained at all costs. This means ideas aren't challenged, people don't want to be seen to disagree with each other and anyone who aggressively pushes their ideas isn't viewed as a "team player".

As a result, many people feel it's better to just shut up and go along than challenge the group's existing mindset. It also means that getting passionate about what you feel or think might upset someone or cause you to be momentarily less than "collegial". The result can be a lack of quality input and solutions that get consensus but seldom break new ground.

Leaders need to help facilitate good discussion and help the team handle tension in a positive way. Primarily it means keeping feedback focused on the issue or solution at hand, not at the person speaking. It also means you may have to occasionally solicit answers where there is currently stony silence. That leads us to….

MYTH #2 You should never call on anyone by name in a meeting lest you embarrass them.
This one drives me crazy. You can't complain that nobody contributes then limit opportunities to contribute, nor can you complain about a lack of accountability but eliminate the most effective way of demonstrating accountability.

First of all, the dynamics of online meetings means you can't make eye contact and read body language with your participants so you can't tell when someone is thinking, maybe wants to contribute but needs encouragement or is asleep in the corner. Not everyone is willing to pipe right up (and the ones who are aren't always the ones you need to hear from). Secondly, as a meeting leader you have no way of knowing if silence is acceptance, compliance, stone-cold hostility or narcolepsy.

The trick is to play fair with participants. You need to set standards and expectations, then offer people the opportunity to meet them. Sometimes that requires a little proactivity.

You don't want to call on someone you know has no idea of the answer, or is uncomfortable answering that particular question. What you can, and should do, is give people plenty of notice that their feedback will be sought, give them plenty of opportunity to speak up, and call on them when you know they have something to contribute or you really need to hear them.

Technology actually allows you to do this in non-threatening ways. Chat lets those who are introverted, or perhaps have language or accent challenges communicate in a way they're more comfortable with. You can also send chat messages to people asking if they can contribute to the contribution, or urging them to speak up.

On the matter of accountability, though, if you have set expectations, and still haven't heard from anyone, calling on them in a non-threatening way or just to check in is perfectly okay.

If people are used to just tuning out and getting away with it, this is a way to hold them accountable. If they're embarrassed a bit, (and here's where the charges of rudeness come in) maybe they should be. To be blunt, if they're not adding value to the discussion, why are they there? They might be asleep at the switch on the first meeting, but you can bet they'll be more attentive on the second.

This is not to say you go full Captain Bligh on people, humiliating them at will and whipping them into shape, but it does mean that both meeting leaders and participants have expectations on them that need to be met.

Are you a dreadful leader?

Bad manners can be good for you